Cheap Trick albums are like buses… you get two at once and then have to wait 3 years for another. So in 2017 we got We’re All Alright! And Christmas Christmas and now we get the latest offering from the 2016 Rock N’ Roll Hall Of Fame inductees In Another World. Having said that this album was due to be released at the end of 2018 following the May taster of the lead single ‘The Summer Looks Good on You’ however despite a second single release in 2019 (a cover of John Lennon’s ‘Gimme Some Truth’) the album was not eventually completed until 2020 and as we are all aware there was rather a lot going on at that time. So here we are in April 2021 and it’s finally here… was it worth the wait… of course it was!

With Cheap Trick you know exactly what you’re going to get and as ever the quartet hit the ground running with the high octane charge of the lead single with it’s appropriate chorus of “Here Comes The Summer”. Rick Nielsen totally shreds things up during ‘Quit Waking Me Up’. It’s hard to believe that the guitarist is now 72 years old which makes him the elder statesman with Zander and Peterson a mere 68 and 70 respectively. Obviously no one told him or the rest of the band that it’s okay to slow down. Not that they would listen. ‘Another World’ takes us into a ‘The Flame’ style ballad showing Robin Zander still has the versatility in his voice which has given the band such a huge live following. It’s astounding that after 48 years together the band are still able to write rockers with the quality and power of ‘Boys & Girls & Rock N Roll’ and ‘The Party’ but they do. Big brass introduces ‘Final Days’ and it’s pounding anthemic beat is supplied by Daxx Neilsen son of Rick on drums. Finally we get a breather (I’m not sure the band need it but the listeners surely do) with ‘So It Goes’.

There is usually one track on every Trick album which shows their love of The Beatles and this is it. No rest for the wicked and everything flies off again with ‘Light Up The Fire’ and they certainly do. New boy Neilsen Jr. lays down a massive beat solidly earning his place along side the original members. Cheap Trick is definitely in Daxx’s blood and the 11 years he has spent playing live with the band following Bun E. Carlos’s retirement from the stage are now paying dividends in the studio. The contrast song to song is what carries the interest throughout this set and this is never more evident than on ‘Light Up The Fire’ and ‘Passing Through’ which has a slower pace but is underpinned by some absolutely dirty guitar.

Cheap Trick never slow for long and bounce back with ‘Here’s Looking At You’ and it is pure Rock N’ Roll with added ‘Dream Police’ keyboards. Whereas most band would take an alternative version of a song and stick it at the end as a “Bonus Track”… not Cheap Trick and ‘Another World (Reprise)’ rocks up track three with blistering effect. Taking it down once more on ‘I’ll See You Again’ is a trick (see what I did there) that the band use all of the time closing out on a slow fade to heighten the effect of coming back with a punch which is exactly what happens with the John Lennon cover and second single ‘Gimme The Truth’ with added guitar power supplied by ex-Pistol Steve Jones it’s one hell of a way to exit.

These guys really shouldn’t be rocking the world the way they do at their ages but they are and we should be eternally grateful. The thing with Cheap Trick is that they are more than capable of going up against any of the live titans on the festival circuit and not only holding their own but upstaging them. Now with In Another World they also have a modern day album to sit along side In Color, Dream Police etc. I for one look forward to the tour as Cheap Trick prove once more that you’re never to old to Rock N Roll. 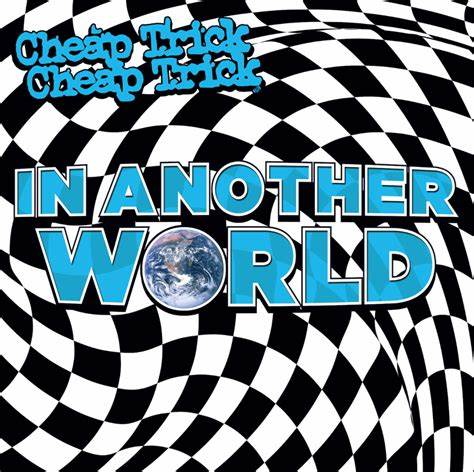