Nottinghamshire’s finest post-goth combo began life as two hypothetical questions: what would Play Dead sound like if they’d formed in 2019 and how would modern goth have evolved if Killing Joke were the main propagators? The answer to both is Chaos Bleak. Taking their musical cues from the harder end of post-punk (and eschewing the stereotypical goth trappings) their debut album, A New Age Of Darkness, presents a frightening vision of a not-too-distant dystopian future.

The Orwellian ‘Outer Twilight’ is the brief intro that sets a rather ominous tone and draws us dreamily into the band’s dark world before ‘Return/Revenge’ rudely wakes us with a vicious uppercut. Since their inception in 2019 Chaos Bleak have left a tantalising trail of singles and EP’s and this was one of the explosive. The soundtrack to civil disobedience ‘Return/Revenge’ is the natural extension of Killing Joke’s ‘Wardance’ as pounding drums, dark electronica and chugging riffs all combine to create an air of oppression. Continuing in a similar vein ‘Regrets Are For Yesterday’ shows no mercy and stands defiant as waves of synths threaten to sweep us away.

Chaos Bleak are a difficult band to pigeonhole but their sound definitely has a crossover appeal and effortlessly straddles several genres. ‘Write Her Name In Diamonds’ is punchy enough to appease metalheads, ‘Grey Lady Walks’ could have come from the pen of Wilkie Collins and will have goths salivating while the blasphemous ‘Door To Nowhere’ is an electronic/punk hybrid that’ll appeal equally to both camps. However, there’s a certain darkness that permeates this album and pulls all the stands together into a cohesive whole, regardless of the musical twists and turns that Chaos Bleak take.

The thing I like most about Chaos Bleak is their refusal to be shackled by any musical restraints. While many of their peers hark back to some mythical ‘golden age of goth’ and sing about castles and catacombs Chaos Bleak have a forward vision that finds them raising their eyes to the heavens for the celebration of retro sci-fi that is ‘Watch The Night Sky’. It’s a lyrical manoeuvre that adds variety to proceedings and it’s a decision that wouldn’t occur to lesser bands. Charting civil unrest in a post-industrial landscape ‘When The Lights Go Out’ is an unsettling vision of tomorrow and is paired with ‘Funeral In Berlin’, an equally disconcerting ride through Weimar Germany in an open topped Mercedes.

I’m sure the trio who make up Chaos Bleak would balk at the term ‘supergroup’ but, featuring members of Death Party UK, 13 Candles and Every New Dead Ghost, no other term will suffice. Each brings a wealth of experience to the table meaning they know just how far to push things, reigning in their aggression and then letting it fly at the most appropriate moments. If Black Sabbath had read Nietzsche while imbibing amphetamine then I’m sure the resulting sound would be something akin to the penultimate ‘Beneath The Moon’. ‘A Drone In The Darkness’ is another brief instrumental to bookend the album and ensures the band exit in an eerie manner.

A New Age Of Darkness is the perfect summation of two years hard work and signposts Chaos Bleak a bright future. 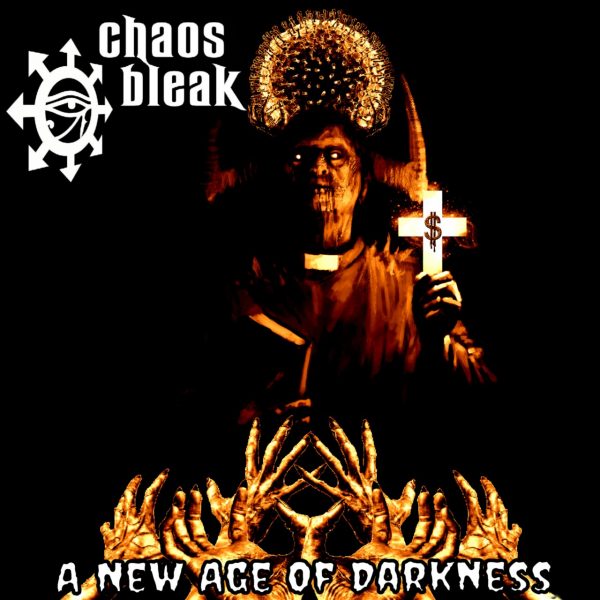