Fix and Stones will break my bones

Paul Castles has his ears singed by Disasters of Reality, the new album from returning Brummie bruisers Cerebral Fix, released via Xtreem Records on 15 September, 2016.

It’s all well and good bands taking a few years out, but 20 fuckin’ 4 years! Welcome back Cerebral Fix – Which black hole of depravity have you all been cooped up in for nigh on a quarter of a century? Anyone old enough to be either bald or grey may recall the Brummie punk/thrasher’s first album, in the pre-internet, pre-digital and pre-just about everything else age – well 1988 anyway.

A further three albums were released by Cerebral Fix but Disaster of Reality is their first since 1992 and a right royal rumble of a racket it is too triggering memories of bands like The Exploited and Varukers. Cerebral Fix have gone through a few changes with vocalist Neil bassist Nigel and guitarist Chris now giving the band a new look although the tempo and punk/thrash spirit remains pretty much how older fans will remember the band way back when.

The album’s dirty dozen songs extend to 37 minutes showing that they’re keeping to the old punk ethos of hitting them hard, low and quick. The one notable exception is album opener ‘Justify’ which stretches to six minutes of controlled aggression that rumbles like a dumptruck from start to finish. The punk vibe really kicks in with the next track ‘Mosh Injury’ which is a nasty little beast but one with a great hook and a good ol’ terrace chant for the boys in the front row too!

‘Crucified World’ rages like an old UK Subs anthem while the fuzzed up intro to ‘Realities of War’ will have you manning the barricades before the tin can drum detonates another invigorating three minutes of mayhem. ‘Skate Fear’ is an amusing ditty that you could almost hear the Upstarts tearing through in an old East End boozer. It’s raw, raucous and ready for a rumble.

It might be two-decades since they’ve last worked together but on songs such as the murderous ‘Reality Pill’ it’s as though the intervening years haven’t happened and we’re transported back to a different age where no-one stood on ceremony  and every song was there to be hoisted up with bludgeoning battle cries.

The album includes a riotous rendition of The Exploited’s perennial crowd-pleaser ‘Dead Cities’ while the equally frenetic ‘Never Say Never Again’ is a homage to Potteries’ punk kings Discharge, who of course themselves have picked up the thread again of late. ‘Felted Cross’ is an absolute scorcher full of menace with a furball of a riff urging  the tempo forward with a great vocal chorus hailing the virtues of 1984 – possibly the pick of the album.

The explosive ‘Inside My Guts’ is another complete wrecking ball and stand in its way if you dare with the chorus landing like a bottle to the head, not that you’d see it coming with all carnage kicking up around you. The 37 minutes whizz by like a getaway driver but not before the jah wobbling ‘Mystery’ closer – a Babylonian climax  to a throwback to more innocent times. 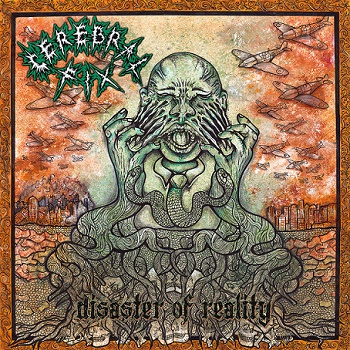