I’m always a bit dubious when bands release self-covers albums. They often drop when a group has run out of steam, and they seem a lazy addition to a discography but in the case of CATS in SPACE’s new record it makes perfect sense. With new vocalist Damien Edwards at the helm CATS in SPACE have been revitalised and rather than resting on their laurels the sumptuous Diamonds – The Best of CATS in SPACE signposts a bright future.

With crashing chords, swirling keyboards and soaring vocals everything about opener ‘Too Many Gods’ screams “epic” and it’s hard not to get swept along with the band’s sheer effervescence. The title track from their eponymous debut album it’s only natural that this collection starts here, and singer Edwards immediately imparts his personality on proceedings. Damien originally plied his trade in Jeff Wayne’s War of the Worlds stage show and he brings a little of that aesthetic to ‘Too Many Gods’. It sounds theatrical, not in an overblown Jim Steinman way, more subtly, but wouldn’t sound out of place in a lavish Broadway musical, nevertheless. With vocal harmonies that could give Queen a run for their money ‘Too Many Gods’ grabs the listener by the lapels and doesn’t let go for four fortuitous minutes.

Those already acquainted with the CATS will know what to expect; driving, adult orientated rock with more than a nod to the seventies while for those whose path the CATS are crossing for the first time are in for a real treat. With a delicious hook ‘Silver And Gold’ is the stuff that rock dreams are made of and the spacious production only adds to its reverie, but it’s certainly not recommended for somnambulists especially when Greg Hart delivers an electrifying solo. The six members who comprise CATS in SPACE have decades of experience and they turn ‘Mr. Heartache’ into a musical time machine; close your eyes and it’ll magically transport you back to a more carefree age of lava lamps and bell-bottoms (and, of course, great music).

Despite being a compilation album Diamonds ebbs and flows perfectly with the songs, culled from four studio albums, operating as a unified whole. A disco beat propels ‘Thunder In The Night’ forward and has a definite crossover appeal (much like KISS’ ‘I Was Made For Loving You’) while ‘Hologram Man’ is an all-out rocker, a musical explosion that sends ticker-tape flying in every direction. Andy Stewart’s synths give ‘Scarecrow’ a slightly sinister evil carnival kind of vibe and allows Dean Howard to fly with his six string. With some Cheap Trick stylised harmonies, the groove laden ‘Last Man Standing’ makes a fine precursor to the bands theme song ‘Greatest Story Never Told’, recorded live at their 2020 Full Stream Ahead performance. The CD version adds three tracks from last year’s critically acclaimed Atlantis opus.

Diamonds is an album that signifies CATS in SPACE’s arrival; they’ve reached a pinnacle of sorts and must decide where to go from here. And the only way is up. 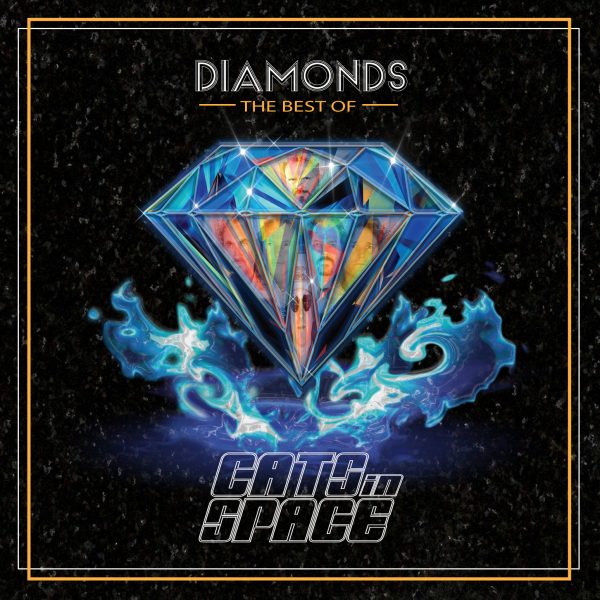