Welcome back boys, what’s kept you so long! Reconnecting with UK gorehounds Carcass is like meeting up again with a long lost pal. The connection is still genuine and strong and the qualities that you admired in them back in the day have not been diminished by the passing of a few years. Or in the case of Carcass, make that 18 years since their last album Swansong. Now revitalized, reinvigorated, and reunited, Carcass, having earned their stripes a generation ago, are ready to reestablish themselves as among the generals of the UK melodic death metal battalions. Carcass have performed a few shows over the last half-a-dozen years but the eagerly awaited release of Surgical Steel, via Nuclear Blast – coupled with a headliner spot at Damnation in November – signal that the Carcass comeback is now complete. Blessed by the hand of producer Colin Richardson (Napalm Death, Cannibal Corpse) and mixed by Andy Sneap (Exodus, Testament) Surgical Steel is not surprisingly an accomplished album, one worth waiting – for some – a lifetime for. It is devilishly destructive with a sophisticated sinister vein throbbing throughout its 11-song duration.

After the whispy guitar intro of opener ‘1985’ – the year the band first got together -Carcass kick down the barricades big time with the suitably titled thrash happy ‘Thrasher’s Abbatoir’ with vocalist Jeff Walker snapping ferociously like a deranged Rottweiler refusing to release its bloodied grip on a rotting piece of maggot infested meat – a Carcass no less. The join is near enough seamless as the quartet crash straight into the frenzied and furious intriguingly titled ‘Cadavar Pouch Conveyor System’.  Mid-track it careers off into the first of several seriously captivating guitar solos from original band member Bill Steer before returning to its raging rampant riff with Walker screeching wildly over the top. As powerful as that is, ‘A Congealed Clot of Blood’ is mindblowing with an almighty mean hook that would have a prize salmon leaping out of the river to save its skin. You can hear the evil oozing out of this deformed diamond. ‘Captive Bolt Pistol’ is a ferocious firecracker of a track but on the whole Surgical Steel is not quite as full of vile and venom as their very early Carcass material. Not surprisingly they are less splatter happy than in their youth but tracks such as eight-minute curtain closer  ‘Mount of Execution’ showcase the band’s writing skills and demand a burning seal of approval for their return.

Yeah baby, Carcass really are back. Engrossing and evil and painstakingly brilliant with Steer taking centre stage for another spiraling solo that holds the song together until Walker jumps back in snarling away like someone possessed. Aside from its two founding fathers the current Carcass line-up also features guitarist Ben Ash (Desolation, Pig Iron) and perhaps even more significantly sticks savage Dan Wilding (Aborted, Trigger The Bloodshed). Original drummer Ken Owen is no longer able to physically command the drums but is clearly still viewed as a member of the Carcass family, contributing some welcome guest vocals to this release. Wilding though more than lives up to his name with his rabid rapid-fire demonstration on the skins such as on the eccentrically named ‘Noncompliance to ASTM F 899-12 Standard’. (For the record, former stalwarts Michael Amott and Daniel Erlandsson are now a fixture in Arch Enemy.) Carcass have already stated their intent to feature a handful of new songs in their set so for the Midland metalheads not heading to Leeds in November (Damnation) be sure to check out these grandees of gore at the Academy on the Amon Amarth bill on November 12. 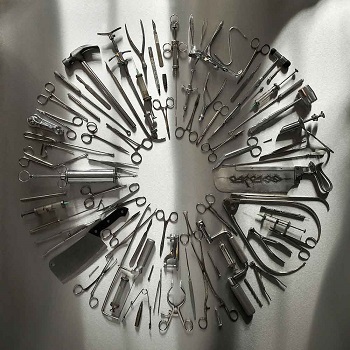