This five-string juggernaut of a roadtrip was given the suitably weighty title of the ‘Deathcrusher 2015 tour’. With such precious cargo on board it will surprise no-one to learn that Deathcrusher more than lived up to its name. In fact there was a real buzz around Wolverhampton as this was the opening night of a UK tour that was to be immediately followed by a whole host of further dates across the Channel.

First up were Herod, who turned in a sturdy, albeit brief, set for the early arrivals, of which there were thankfully quite a few. The Swiss trio were the only really unknown quantity among this line-up of giants but showed no inhibitions in ratcheting their way through through a lively set full of aggressive slams.

Voivod were not as heavy or severe as the three bands to follow but the Canadian thrash crew certainly know how to conjure up a riff or two. They were also clearly relaxed in this company, refusing to take things too seriously. Perhaps this had something to do with the most poignant moment of the night when Voidod vocalist Denis ‘Snake’ Bélanger solemnly announced that bass player Rocky’s father had died that very morning. For him to come out and play with such conviction was a tribute in itself and with the Wulfrun’s collective heart well and truly melted, Rocky received a personal ovation which was then repeated at the end of the Quebec quartet’s inspired set with emotional hugs all round from fellow Voivod members. Pop would be proud.

Napalm Death require nothing by way of introduction. If they do, you’ve stumbled across the wrong review. As near as it gets to a hometown gig for the lads, Napalm are incapable of being anything other than brilliant at all times. Barney is a frontman like no other, his involuntary jerks and spasms coming together like a foal trying to find its feet for the first time. Barney is no cuddly friend though, serving up an unrelenting barrage of socio-politico views that, in the main, meet with a favourable response. In fact get this dude on Question Time as his thought-provoking take on the world’s ills – both in this country and beyond – deserve a wider audience.

Alongside Barney was the mop-top bassist Shane Embury, while Walsall’s very own Erik Burke continues to stand in for Mitch Harris. With a 30-year back catalogue to thumb through Napalm dropped the bombs quickly and with purpose, the irascible ‘Scum’, ‘Smash a Single Digit’ and ‘You Suffer’ among a cluster of crashing numbers. And of course they also steamed through the obligatory punk classic, ‘Nazi Punks’ by the Dead Kennedys.

Much like the dinosaurs you do worry that at some point on the horizon bands like Napalm along with the following two bands will inevitably die out. But fortunately metal’s Jurassic warriors are showing no signs of diminishing powers just yet, 30 years after first lighting the fuse.

Indeed, Deathcrusher was a quick return to these shores for US giants Obituary who served up some pummeling old school death metal. Frontman John Tardy could be spotted just to the side of the stage as the Florida titans went into riff overload on their opening instrumental scenesetter ‘Red Neck Stomp’. Once the last few embers of that burning intro had drifted up into the Wulfrun rafters, Tardy made his entrance and proceeded to take the Florida veterans down career corridors that included the likes of ‘Slowly We Rot’ and ‘Violence’.

Although rammed to the hilt with aggression, Obituary are able to slow things down when the mood takes them without ever losing any of their brutal sledgehammer power – My personal pick of the five acts on the night.

Last up, and still touring the immense Surgical Steel album were Tyneside titans Carcass. One of the real old school names that many had thought had been lost forever, the last couple of years has seen them get the show literally back on the road. While high profile dates at Bloodstock along with a support slot on the Amon Amarth tour have helped them forge a blinding bond with a whole new generation of fans, the key to the rediscovered Carcass success story is the Surgical Steel album. It’s a smorgasboard of death and thrash metal with raging riffs, cranium crushing drum attacks and Jeff Walker’s machinegun vocals. Song titles such as ‘Cadavar Pouch Conveyor System’ and ‘The Granulating Dark Satanic Mills’ may not mean much to your average Joe, but to a roomful of hardened metalheads these are the very air that they breathe to get them through a day at work or school.

Fortunately with this Deathcrusher opening salvo falling on a Friday, most of the crowd could probably indulge in a lie-in the following morning. After this five-star onslaught they’ll be in need of it. 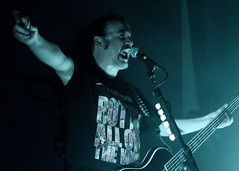 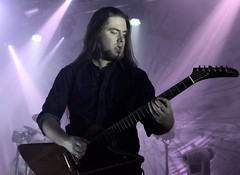 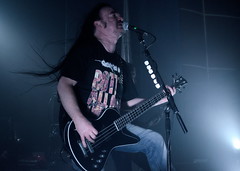 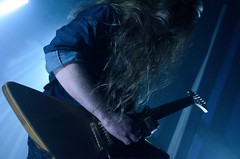 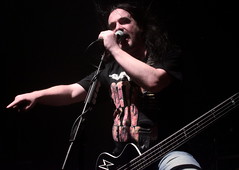 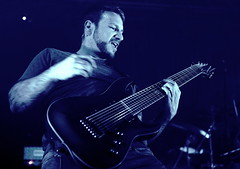 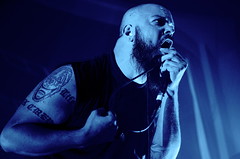 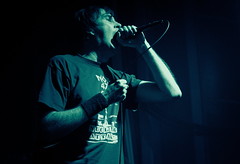 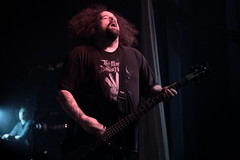 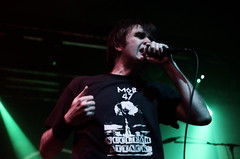 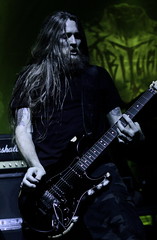 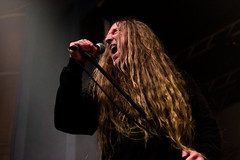 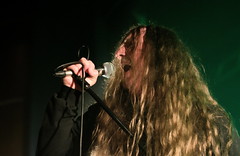 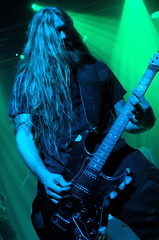 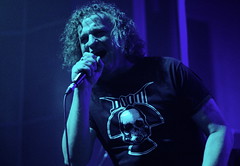 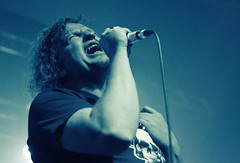 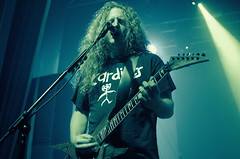 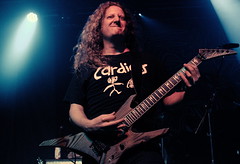