Horrific, bloodthirsty and relentless Cannibal Corpse encapsulate all that’s good about death metal. For over thee decades they’ve been terrorising listeners with their punishing sound and their 15th album, Violence Unimagined, finds the band exploring new ground and they’ve produced a record that stands tall in an already stellar discography.

Cannibal Corpse aren’t a band who deal in subtlety and if any proof were required just listen to the opening cut, ‘Murderous Rampage’. Like seeing your reflection in a bullet that’s about to enter your cranium it arrives with little fanfare and is all the better for it. New guitarist Erik Rutan (Hate Eternal, Morbid Angel) immediately makes his presence felt and riffs in tandem with Rob Barrett to create a truly crushing sound before they trade a couple of blistering solos and, aided by a huge, expansive production that utilises the full dynamic range, they attack from both speakers. In truth, one Cannibal Corpse song is worth an album of other’s material and ‘Murderous Rampage’ is chock-full of bombastic blast beats, dizzying drum fills and guttural growls.

There’s something very cinematic about Cannibal Corpse’s sound; it’s the soundtrack to the most foul, depraved slasher flick so it is appropriate that the lead single, ‘Inhumane Harvest’, is accompanied by a blockbuster style video. Directed by David Brodsky it is an eye-popping (literally), horrific mini epic that views the world through blood splattered spectacles. Not for the faint hearted (neither sonically or visually) it’s a piece of toe-curling, organ harvesting exploitation that marries well with the equally savage lyricism. George “Corpsegrinder” Fisher’s vocals primarily stay in the low range (with very few high pitch screams) which adds to the rather unsettling feel.

Overall Violence Unimagined has the vibe of a band pushing the boundaries and trying something new. While there’s no radical departure or major deviation from the death metal template each song has its own unique feel and the constantly shifting tempos ensure that it doesn’t descend into one long blast beat. Doing exactly what it says on the tin ‘Surround, Kill, Devour’ is a chug-fest that’s sucked back into the lungs of hell while ‘Ritual Annihilation’ ups the ante and seems set to burn itself out on its own frenetic energy before being abruptly curtailed by a sudden hammer blow. Drummer Paul Mazurkiewicz is the anchor that grounds the band, the totem around which the instrumentation swirls and throughout, an enfant terrible, he attempts to pound his kit into the studio floor.

As the world is gripped in the midst of a pandemic it seems Violence Unimagined has arrived at just the right time. A serial killer on a rampage this album isn’t here to take names; it’s a brutal album for brutal times that rarely lets up over 42 blood sodden minutes. Like an evil Hansel and Gretel, ‘Follow The Blood’ leaves an enticing trail that leads to the Satanic ‘Slowly Sawn’ and the amphetamine overdose that is ‘Overtorture’. By the time we reach closer ‘Cerements Of The Flayed’ the listener is left slightly punch drunk but there’s no hope of absolution or redemption as Cannibal Corpse bludgeon towards a finale that ends as abruptly as they began.

While many of their peers are treading water and enjoying ‘heritage’ status Cannibal Corpse certainly aren’t resting on their laurels and they’re still managing to sound fresh and vital. Here’s to the next thirty years! 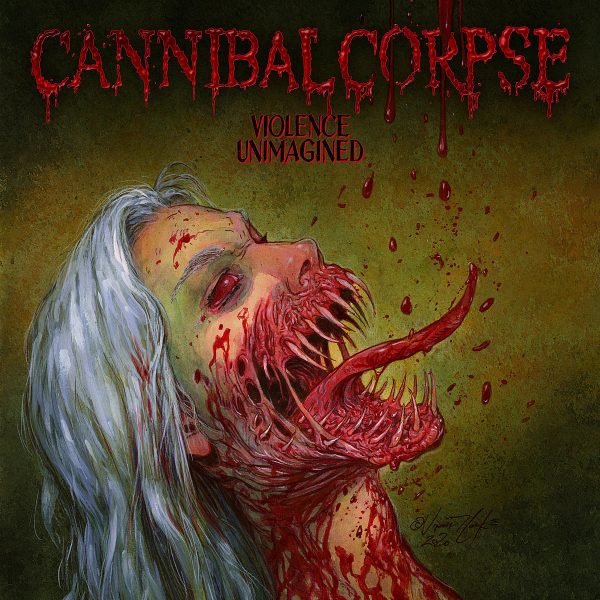