Paul ‘where’s the A-Z’ Castles loses his way up Old Corpse Road and puts the blame firmly at the door Of Campfires and Evening Mists, released by Cacophonous Records on 27 May 2016

Are you familiar with The Bearer, The Revenant, The Wanderer, The Dreamer and The Watcher? If not I’ll put you out of your state of perpetual misery. These are the five good and true fellows that make up arguably the UK’s finest modern day storytellers, Old Corpse Road. There are plenty of bands keen to wear the tag of ‘extreme metal’. Few though would consider starting a song by reciting a few opening lines from Shakespeare’s Merry Wives of Windsor. Quoting the Bard is not a prerequisite for standing out from the crowd but it certainly does you no harm.

Over the last few years Old Corpse Road have forged a reputation for delving back in time to the Magna Carta and such like in their quest for inspiration from bygone days of yore. Almost the Mary Beard of extreme metal in fact! But while paganism peppers much of what they say and sound like, the north east five-piece are prepared to wrap some of the more flaming passages into a blazing black metal blanket.

Old Corpse Road are modern day William Tells, storytellers, and most of their prose is the stuff of legend, hauntings and esoteric episodes. Even the band’s name is taken from a bleak crossing nestled in the hamlet of Swindale Head in the Lake District. As there was no cemetery until the 1700s the path was used by a horse and cart to transport the dead a few miles down the road to the nearest available plot – hence it’s title.

Suitably macabre and mysterious truisms such as this were the feature of the band’s 2012 debut album Tis Witching Hour. This magnificent and at times mystical follow-up, Of Campfires and Evening Mists, is very much drawn from the druids, and the way in which old tales were once shared. 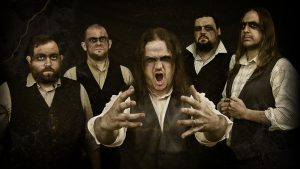 The opening track sets the scene with a huskily spoken script with a meandering message of stone circles and ancestral places of worship. The black heart of Old Corpse Road first surfaces on ‘The Whispers of Long Meg Through the Solstice’ a more pressing piece injected with urgency by the presence of a keyboard. An old church organ creates the suitably spooky intro to ‘Herne of Windsor Forest’ another epic tale about a shady horned figure in the woods with dark atmospheric touches that climb inexorably towards a rousing symphonic finish.

‘Pendle – Daughters of the Black Moon’ is so raw in places it almost gives you blisters as all hell is let loose and yet along its 11-minute journey there’s some melancholic choral chanting sung with far more conviction than you’re likely to hear down your local church on a Sunday morning.

One of the shorter tracks is ‘Sorrow Through Pendle Woods’ but it is also one of the most powerful, an instrumental breather, led by an organ played with simplicity and yet at times touching melancholy, particularly when accompanied by a sorrowful string section. With ‘The Great Thunderstorm’ Old Corpse Road throw further fuel on the camp fire with a rustic rampage back into long since forgotten times with unseen voices barking out from the shadows heightening the tension around a song in which the layers are piled ever higher.

After the extravagant 10-minute ‘Peg Powler’ OCR slowly bow out with ‘Closing the Circle – Hail and Farewell’, a fittingly sombre note on which to end an album which has the ability to transport you back in time to a simpler and yet more vivid way of life. 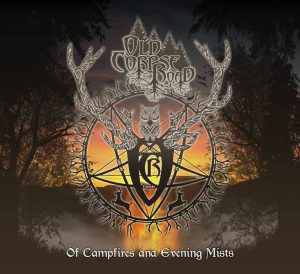