Needless to say I love it! The whole point of this discharge of putrid power is to be as warped as a violin left too long in the sun. And Cabaret Aberrante do not disappoint with this their third full length release pulsing with blastbeats, shrieks and riveting riffs. Such is the serrated savagery that at times it takes on the aural air of an 80s snuff movie, starting with the distressed quivering female cries that precipitate the opening title track ‘Sadismo Post Porno’. The frenzied riffs are almost Hitchcock like, spinning into a vicious whirlwind before the bowel shaking growls add another layer of menace. Structurally the song is superb, a neat breakdown, an injection of those irascible piggy squeals and a dynamic riff that could slice through your wrists quicker than it takes for you to check the time on your watch.

It’s menacing, maniacal and masterful in its stomach exploding execution. But Cabaret Abberante have a soft side, well kind of. On ‘Coronada con Vísceras’ the tempo tempers to more of rumbling beast, still as gripping but with the brakes at least applied a little, although by book-ending the track with some choral harmonies a dark cloud still embraces things. 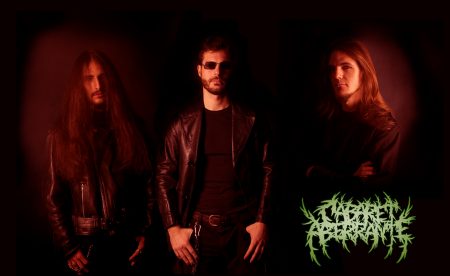 Make no mistake though because on ‘Paraíso Mórbido’ we get back to more of the slash and gore stuff, the blastbeats providing a powerful backdrop to yet more female distress cries and wails, almost as though the victim is being savaged limb by bloody limb by some depraved monster.

The blastbeats rumble like a low flying jet aircraft on ‘Vidas Estériles’ although the buzzsaw riff is no less commanding even at times allowing the vocal chords to take a breather during an instrumental interlude. At around seven minutes ‘El cerdo Nazareno’ is stretching it for a grind/death outfit but with a threatening vibe at its core, Cabaret Abbarante hold sway well enough, the song ebbing and flowing with a riff tastier than a bowl of paella.  The rabid ‘Ahogada en Nuestros Vómitos’ finally brings this perverted parade of Catalonian carnage to an end.

While the city’s football team may have been conquering Europe for the past decade even they would struggle to match the levels of Barca brutality provided by Cabaret Abberante. 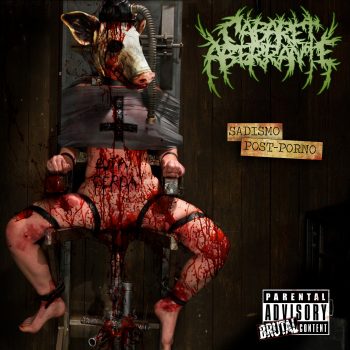