‘The Legendary 1979 No Nukes Concerts’ film will be released in HD on physical formats on 19th November, including on two CD with DVD, two CD with Blu-Ray and two-LP formats. The film will be available globally in HD for digital download on 16th November and digital rental on 23rd November. ‘Sherry Darling’ became a fan favourite during the ‘Darkness on The Edge of Town’ tour (1978), especially because it had not yet been recorded. Bruce would ultimately include it on ‘The River’ album (1980) and continue to perform it on nearly every tour since.

A composite of two performances captured during the multi-day ‘No Nukes’ concerts, the film packs the intensity of a marathon Bruce Springsteen and The E Street Band show into a crackling 90 minute run-time. Among the highlights are then-unreleased versions of ‘The River’ and ‘Sherry Darling,’ live staples ‘Badlands,’ ‘Born To Run’ and ‘Thunder Road,’ plus covers of Buddy Holly’s ‘Rave On’ and a version of Maurice Williams’ ‘Stay’ featuring special guests Jackson Browne, Tom Petty and Rosemary Butler. Noted film producer Jon Kilik, who served in the camera crew for the No Nukes concerts and penned liner notes for this release, reflects that “magic was in the air. The energy on stage and from the crowd was beyond measure and description.” ‘The Legendary 1979 No Nukes Concerts’ were captured while Springsteen and the E Street Band were in the midst of recording ‘The River’ and just after the conclusion of their breakout 1978 Darkness Tour, marking a rare chance to witness the future Rock and Roll Hall of Famers comprehensively in the heart of their reputation-making rise.

‘The Legendary 1979 No Nukes Concerts’ Setlist1. Prove It All Night 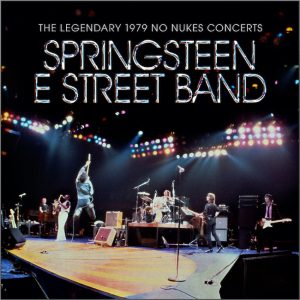