You will just have to forgive me here, because this is going to have to be long. Like one of yer man’s marathon concerts, everything has to be covered, no one can be left behind, every song need’s to be delved into, discussed, pored over, dug into, because this, the return of Bruce Springsteen and the E Street Band, this is big.

Like a mythical gunslinger, like an evangelical, guitar-totin’ Shane, Bruce Springsteen (and the E Street Band) always seem to turn up when the world needs them most. They reformed in 1999 and, after 9-11, there they were, releasing ‘The Rising’. And now, in an age of toxic politics and global pandemic, they’re back with ‘Letter To You’, a collection of 9 new and 3 old tracks, recorded in record time and released now – not held back until all-this-is-over™, not sat on until it could be blasted out in stadiums across the world, but released now, because, yep, we need this.

When the album was announced, just a few short weeks ago, Bruce forums went, for want of a better word, apeshit. Who is this ‘You’ that Bruce is writing to? And what is he writing? The history behind the creation of this album is important too. Although Bruce has kept busy, the E Street Band have been mothballed for some time. Their last recorded output was 2014’s ‘High Hopes’ and the last new Springsteen material they played on together (High Hopes being a collection of re-recorded offcuts) goes further back to 2012’s ‘Wrecking Ball’. They also hadn’t shared a stage together since the finale of 2016’s ‘River’ tour.

Plus there had been deaths. Danny Frederici passed away in 2008, followed by Clarence Clemons in 2011. The band forged ahead, recruiting new E Streeter’s and moving forwards relentlessly…had time been put aside to process the losses, to grieve? Springsteen also admitted that he had been struggling with writers block, finding himself unable to write fresh material for the band, to fill the holes sadly left in the line-up.

And so he pursued other projects – his memoir, the intimate (yet huge, running for just over a year) one-man Broadway show that followed and then his nostalgic ‘Western Stars’ album and movie. All brilliant and all seemingly pointing towards an artist writing his own epilogue, reflecting on his life and career and place in the world. What would be next, if anything at all? Was it a line being written under the past or a long goodbye?

And then, all of a sudden, rumours, activity. New songs, a tour perhaps, and all very E Street-centric. Bruce has spoken of the songs coming to him in visitations over a two week period, being written on an acoustic guitar gifted to him by a fan. And, once the announcement was made, more revelations. The album was recorded absolutely live, mostly first-take, in Springsteen’s home studio/barn over a five day period, Well, four days, on the fifth day they rested…and listened to what they had created. This hadn’t happened since ‘Born In The USA’, were fans (including Steve Van Zandt) finally going to get the album they had wanted for decades?

And so, finally, here we are. The album begins with a lone acoustic guitar and voice. The production is stunning, you hear every breath. Mortality, it appears, is weighing heavy on Bruce’s mind – “one minute you’re here, next minute you’re gone”. Then, a familiar move for anyone who has seen Springsteen live – one by one, band members appear – piano, keys, the heartbeat of a drum. The message is clear, we’re right here behind you, we’ve got your back. The past is alluded to, a “river running, along the edge of town”. A bridge is being built, a direct line between his mostly acoustic recent adventures and what is about to unfold in front of us right now.

And then, boom! The band, and your adrenaline, kick in and you’re immediately on E Street. The sound is incredible – warm, thunderous, crystal clear and thrilling, you can hear the interplay of a band of brothers living and playing on their wits. There are  those swirling keys and that overdriven Roy Orbison/Duane Eddy twang, those mammoth drum breaks and pounding piano. For a Springsteen fan it’s almost overwhelmingly emotional. “All that I found true, I sent it in my letter to you”.

And, somehow, it just gets bigger. It’s here, in spades, in ‘Burnin’ Train’ – that overblown, epic, Phil Spector ‘Born To Run’ sound, that sound only the E Street Band at full throttle can conjure. It’s love and death and sex, massed guitars roar and the solo, when it duly arrives, is (literally) barnstorming. It’s music that was born, machine-tooled to be played live which, right now, is heartbreaking. But awesome, and as thrilling as recorded music gets…all at the same time.

‘Last Man Standing’ again addresses mortality. Its mournful yet celebratory, Bruce recalling his first band, The Castiles, and the fact that he is indeed the last living member. “You count the names of the missing as you count off time”. And here comes the first big sax solo of the set, coming hot on the heels of a big old key change. Yeah, the fallen are being remembered but this is an Irish wake. Thematically the album is beginning to recall Bob Dylan’s epic take on life and death, ‘Time Out Of Mind’, although the grim reaper is being stared down with much more defiance here. There will be more about Bob later.

‘The Power Of Prayer’ tackles another Bruce mainstay – religion (or does it?). What religion is it we’re dealing with here…church? love? music? and does it matter, is there any delineation? Bruce and Jake lock in together for a song chock full of mammoth sax breaks. A Max Weinberg drumbeat hangs deliciously in the air for a moment before the band snap back in. Everything you want in a Bruce song is all here, even Ben E. King gets a look in.

Music is the key theme again and again. ‘House Of A Thousand Guitars’ is a message to his loyal followers – a prayer, a promise, an affirmation. “brothers and sisters, wherever you are, we’ll meet in the house of a thousand guitars”. We will meet again, in a stadium somewhere, and sing these songs back to him en masse. The band, meanwhile, pick up the slack left by the absence of us audience types and sing as one, raising the rafters, promising us a place where we can “shake off your troubles” and Bruce, as in ‘The Rising’, assures us that “it’s alright, yeah, it’s alright”. And ‘Ghosts’, which you’ve probably already heard, is more of the same – guitars yaggerdang uproariously while Bruce promises to “count the band and kick into overdrive”. It’s about nothing more than the life-affirming joy of playing rock ‘n roll – it even has it’s own mid-song ‘1,2,3,4’ count in.

What’s also clear is that Bruce seems to be determinedly non-political…until the ominous chords of ‘Rainmaker’ approach. What can you say about someone who is already a walking parody? Springsteen has wisely decided, other than this allegorical bruiser, to leave the political sphere alone. This is a simple warning, snake oil salesmen can manage to convince you “that white’s black and black’s white”. There’s no judgement, just a resigned acknowledgement that “sometimes the folks need to believe in something so bad that they’ll hire a rainmaker”.

Oh yeah, the old songs. ‘Letter To You’ contains 3 old tracks. Very old, early 70’s, re-recorded for the album. Which raises more questions – has Bruce not completely broken through that writers block yet or is there a good reason why these three particular tracks happen to be here. This is Bruce – come on, of course there’s a plan. This is where Dylan re-emerges. These songs were written pretty much pre-‘Greetings From Asbury Park’ – when Bruce was still finding his own voice and was still in the thrall of peak era Zimmerman. Hell, ‘If I Was A Priest’ was the song young Springsteen performed on piano to John Hammond to audition for Columbia Records. Here it gets the full big band treatment and is prime ‘Blinded By The Light’ style Bruce. The punk wordsmith Bruce desperate to write his own ‘Subterranean Homesick Blues’. It tells the tale of Jesus as a cowboy, decked out in buckskin…the same buckskin that gets a mention in ‘Ghosts’ perhaps?

‘Janey Needs A Shooter’ is a song that was tweaked and covered in 1980 by Warren Zevon and is here taken at a steadier, heavier click with Dylan style harmonica blasts and piano…oh, that piano. It’s fascinating to hear old Bruce inhabit and interpret young Bruce’s words.

And finally, ‘Song For Orphans’ is pure ‘Blonde On Blonde’ Dylan, so obvious that the inclusion of it here has to be planned and deliberate. Bruce acknowledging a debt to perhaps the only other rock artist successfully illuminating a path, showing us how to age and stay relevant, engaged, on top of your game. There’s no hiding the inspiration for this song and indeed, Dylan becomes a guiding light, a spirit infusing ‘Letter To You’. So yeah, don’t worry about these old songs, they fit right in, sonically and thematically. Bruce’s voice on them is incredible, youthful yet mature, flexible and as immovable as Mount Rushmore. You can hear young Scooter as well as the 50-odd years of experience between then and now. They are a backwards glance and a warm, wry smile, adding emotional context to Bruce’s 2020 ruminations.

We end with the sombre yet optimistic ‘I’ll See You In My Dreams’. Is it a see you soon or a farewell. Who knows, at a guess it feels hopeful – “death is not the end”, a promise that we will all be together again. It ends as it should, just a piano and a voice, singing directly to you.

Phew. What an album. With only limited access and a brief window of time to absorb and write, it’s hard to be objective. But this genuinely feels like one of Bruce’s best. Certainly his best since ‘The Rising’ and possibly even much further back than that – only time and perspective will tell. It doesn’t put a foot wrong. There’s not a single weak link. The production is wonderful and the performances are as good as you’d expect from one of the best bands in the world, let off the leash in a small room together. Arrangement’s were created on the hoof and this band have the history, talent and interplay to be able to do this and convince you that there’s no possible way that these songs could have ever been played better. Ever. By anyone.

This album is an absolute triumph. Intimate, autobiographical, perhaps more than ever before. It’s the closest you’ll ever get to hearing Bruce and the band playing in your front room – for you, to you. At points you could swear he’s looking you, and only you, dead in the eye. It’s a conversation between friends. Hands down it’s his most overtly personal album. There are no tall tales, no characters – no Mary, no wrestlers, stuntmen, cowboys, cops or losers. It’s Bruce, it’s his friends, it’s his listeners, it’s you.

It’s also an extraordinarily healing album. He’s raising the dead. It’s about connection. Lifelines. And it rocks like a bastard. Oh yeah, the ‘You’, do we have any answers? It’s a word that’s been used a lot in this review, in fact it’s the first word written way back there at the top. Figured it out yet…it’s you, the listener. It’s that simple…and he’s that good.

Released by Columbia Records on 23 October 2020 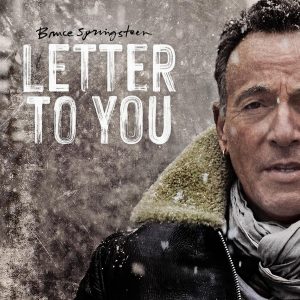