With three incredible weekends of legendary music at BST Hyde Park this year just behind us, American Express presents BST Hyde Park are delighted to reveal that the first headliner to be announced for 2023 is none other than Bruce Springsteen and The E Street Band. 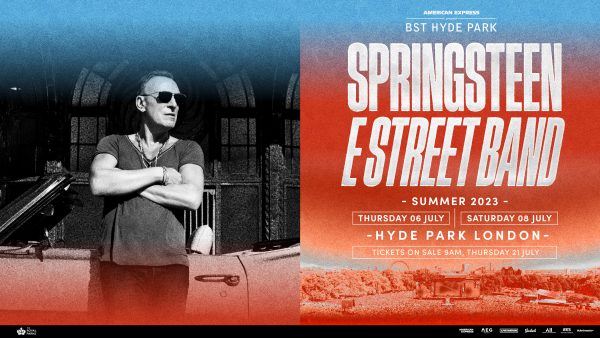 Bruce Springsteen has released 20 studio albums in his career spanning over six decades and has become one of the million tickets across the continent. This tour is the first time Bruce Springsteen and The E Street Band will perform live together since 2016’s 14 month long ‘The River Tour’, which finished in Australia in 2017.

American Express Card members can take advantage of the first presale from 9am, Friday 15th July. Tickets will go on general sale at 9am on Thursday 21st July.

Bruce Springsteen is one of the world’s best-selling music artists. He’s been awarded 20 Grammys, two Golden Globes, an Academy Award, and a Special Tony Award, in addition to being inducted into the Songwriters Hall of Fame and the Rock and Roll Hall of Fame.

His live tours have consistently been placed amongst the highest grossing of each of the last five decades. Bruce Springsteen and The E Street Band’s last tour, ‘The River Tour’, was 2016’s highest grossing tour worldwide. In May 2021, he became the eighth recipient of the Woody Guthrie Prize, a prize that honours an artist who speaks out for social justice and carries on the spirit of the folk singer.

He is an honorary Brit in the eyes of the UK, a true great welcomed by the people every time. Just last month, he famously made a surprise appearance at Glastonbury, joining Paul McCartney on stage for a rendition of his Born In The USA hit ‘Glory Days’ and The Beatles’ ‘I Wanna Be Your Man’. Naturally, after the surprise performance, many were left wondering when Bruce Springsteen might be returning to the UK. American Express presents BST Hyde Park is answering those calls, and giving fans the first chance to see the Rock and Roll Hall of Fame inductee live in the UK next year.

American Express presents BST Hyde Park is a special opportunity to see Bruce Springsteen and The E Street Band live. BST Hyde Park 2022 saw three monumental weekends of music, which began with Rocketman himself Elton John performing as a part of his Farewell Yellow Brick Road Tour. The Rolling Stones were reunited with Hyde Park for two incredible sell out nights, with an emotional and triumphant tribute to the late Charlie Watts. Tottenham’s global star Adele brought it home for “a career best comeback” (The i) at BST Hyde Park for two shows with an incredible all female line up. The Sunday vibes were offered up by Americana legends Eagles and Pearl Jam provided two packed nights of rock n roll. Finally, Britain’s best loved groups Duran Duran closed the final night with a day of singalong smash hits. This year’s festival had been a long time coming and will go down in BST Hyde Park history forever.

Jim King, CEO of European Festivals at AEG Presents, says, “As we wave goodbye to BST Hyde Park 2022, the most successful Hyde Park series ever, there is no bigger and better way to welcome in our 2023 edition than with another of the world’s greatest artists. The excitement of Bruce Springsteen and The E Street Band coming to play two shows at American Express presents BST Hyde Park is why we love live music as much as we do.”