Unashamedly metal, like early Dio or Manowar, everything about Sweden’s Brothers of Metal screams epic. From the 8 piece band (featuring two vocalists and a triple axe attack) to the completely over the top videos Brothers of Metal are just the band for whom the term Trad Metal was coined. Their second album Emblas Saga is forged from the same solid steel and is sure to appeal to fans of Sabaton and Leaves’ Eyes.

Something of a loose concept album Emblas Saga opens with ‘Brood Of The Trickster’, a brief spoken word intro that’s set against a backdrop of atmospheric synths, which builds towards the musical explosion that is ‘POWERSNAKE’. It immediately throws down the gauntlet and sets out the bands stall. Symphonic metal of the highest order it’s overblown, almost classical in its grandiosity, as the vocals tug between Ylva Eriksson’s angelic, female pitch and Joakim Eriksson’s gruff growl and subsequently the song rocks like a longboat on a stormy sea. A mediaeval midsection provides a moment of calm before the ocean roars once more. Delivered with the power of 1,000 slaves rowing a galleon ‘Hel’ is simply an enormous track, this time the vocals work in tandem around which the guitars swirl like a tornado.

Powered by an electrified riff ‘Chain Breaker’ is an insanely catchy slab of metal and with a ferocious groove it’s the type of song that could propel the band into the mainstream without sacrificing their credibility and, trust me, you’ll constantly be hitting repeat. ‘Kaunaz Dagaz’ continues in a similar vein with the guitars dualling like Maiden on ‘Flash of the Blade’. ‘Theft of the Hammer’ follows and pounds like Thor on a rampage, pouring rain, bolts of lightning and rolling thunder are wrapped up in a musical maelstrom. Centrepiece ‘Weaver of Fate’ is the calm after the storm and finds the band taking a more measured approach. Leaning towards folk metal, here Ylva sounds like Sandy Denny and it’s a song that’ll transfer well to the live environment, you can almost see a thousand lighters held aloft with a thousand voices singing along.

The soundtrack to a Viking army sailing off to war ‘Njord’ has its sails filled by some fine shouted vocals. As befitting an epic album the title track is suitably monumental and evolves through several suites. Beginning with vocals in Old Norse, acapella and haunting, it suddenly becomes modern with ascending guitars as the vocalists quickly trade lines as ‘Emblas Saga’ seems to swirl upwards. ‘Brothers Unite’ is sure to become something of a theme tune with its military marching feel. ‘One’ is the prototypical power ballad and paves the way for all out rocker ‘Ride Of The Valkyries’. Flying along like a harridan of witches it barely pauses for breath with shrieking guitars and pounding drums mixed up in its cauldron.

Heavy on the synths ‘To The Skies And Beyond’ is an atmospheric and emotive closer that’s very cinematic. Operatic vocals, a huge riff and a tolling bell all build towards a dramatic ending. From self releasing their debut album (2017s The Prophecy of Ragnarök) to playing some of the biggest stages it has been a meteoric rise for Brothers of Metal but armed with this killer sophomore album the sky’s the limit. 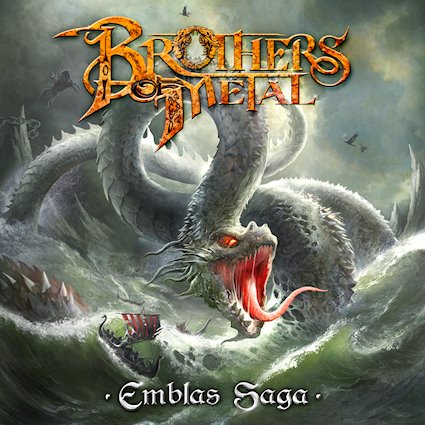