Japanese metal band Bridear have just announced the addition of shows in France, Germany and the Netherlands to their forthcoming September tour of the UK.

They have also recruited brand new guitarist MOE after the departure of MISAKI earlier this year. Lead singer KIMI comments, “MOE brings a real love of heavy metal to the band and is a great technical guitarist. Her power is second to none and we can’t wait for fans to hear us come together live this September!”

MOE herself adds, “I’m so happy to be a part of Bridear and to tour overseas! Bridear fans are the best and I’m looking forward to meeting everyone!”

Having become the first Japanese band to tour internationally last year, Bridear blew UK & EU audiences away with their 2021 shows. Now, in celebration of their 10th Anniversary, they return this September armed with their brand new album Aegis Of Athena, which was released in May.

With the addition of three new European shows, the DECIDE TO SURVIVE tour will be a must-see experience for fans of J-Metal both here and in the EU. Bassist HARU says, “We have added shows in France, Germany, and the Netherlands after our exciting return to the UK! Come bang your head with us!”

The acclaimed five-piece will be performing as follows:

The London show at the Boston Music Rooms will be extra special as the performance will be recorded for a forthcoming live album. KIMI says, “This will be our first ever live album and there is no better place for it than London. London holds a special place in our hearts and we always have such amazing crowds. Don’t miss it as we make BRIDEAR history!” 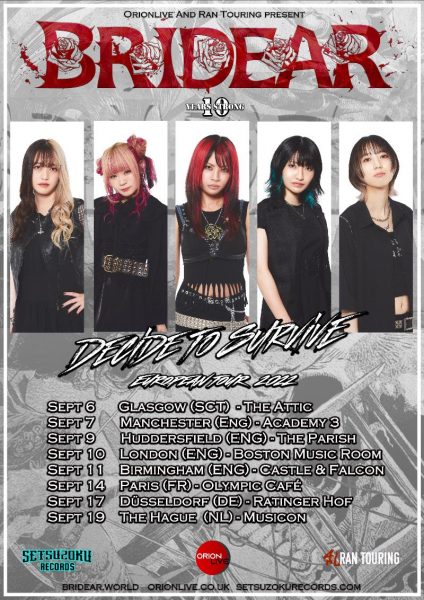