Having released their last long player (Bloody Bride) only 13 months ago Japanese metal queens BRIDEAR make a speedy return with their fifth album Aegis Of Athena. Formed in Fukuoka in 2011 BRIDEAR have carved out a unique niche by blending power metal, prog rock and J-pop into one amazing sound and, a band in constant evolution, Aegis Of Athena (their fourth full-length) finds them forging new ground.

As you’d expect from a band who’ve been in the game for over a decade BRIDEAR certainly known how to ramp up the tension and opening track, ‘Side Of A Bullet’ begins with an elongated intro. It’s slightly discombobulating and, with an other-worldly nature, transports the listener to another dimension meaning that when the band kick in at the three-minute mark, they kick in hard. With some powerhouse drumming from Natsumi, BRIDEAR arrive like a bat out of hell which sets the tone for the rest of the album. At nine-and-a-half minutes ‘Side Of A Bullet’ is a truly epic track that’s almost organic insofar as it shapeshifts, evolves and takes on new form. It’s a song of several suites which is glued together by a haunting motif which appears periodically.

What is immediately noticeable about Aegis Of Athena is that BRIDEAR have brought their progressive influences to the fore and, coupled with their love of all things NWOBHM, makes for a dynamic listen. Sonically, tracks such as ‘Preference’ and ‘Greed’ remind me of Killers-era Maiden (only with a more melodic sensibility) with the latter finding guitarists Ayumi and Misaki soloing and riffing in tandem like Dave Murray and Adrian Smith in their prime. Seemingly tailor made for the live environment ‘Determination’ is sure to go down a storm wherever it’s played and contains plenty of opportunities for arms-outstretched, horns-held-high, thousand-voices-screaming, crowd participation. Stomping as if a kabuki monster ‘Greed’ is the album’s latest single and, accompanied by a fine video, it’s a groove laden affair which ensures Aegis Of Athena ululates like a dragon’s chest.

The line-up which now comprises BRIDEAR have been together for several albums and tours and Aegis Of Athena finds the band locking in like well-oiled cogs. There’s a chemistry present that finds all of the band’s constituent parts unifying and no more so than with bassist Haru and vocalist Kimi. On tracks such as ‘The Bathtub’ the diminutive Haru unleashes some earth-shaking growls that make a fine counterpoint to Kimi’s crystalline vocals and the pair act as a foil, each highlighting and mirroring the other. ‘BRAVE NEW WORLD REVISITED’ is, like ‘Side Of A Bullet’, another epic track that was debuted during their 2021 tour and, with an ominous tolling bell would have made for a cool closer to bookend the record. However, that honour goes the all-out rocker ‘Road’. It’s a full-throttle, pedal-to-the-metal way to end an album and ensures BRIDEAR won’t be forgotten in a hurry.

If you like your metal hard and melodic with plenty of twists and turns, gnarly guitar solos, a pounding rhythm section and heavenly vocals then Aegis Of Athena could be your new favourite album. 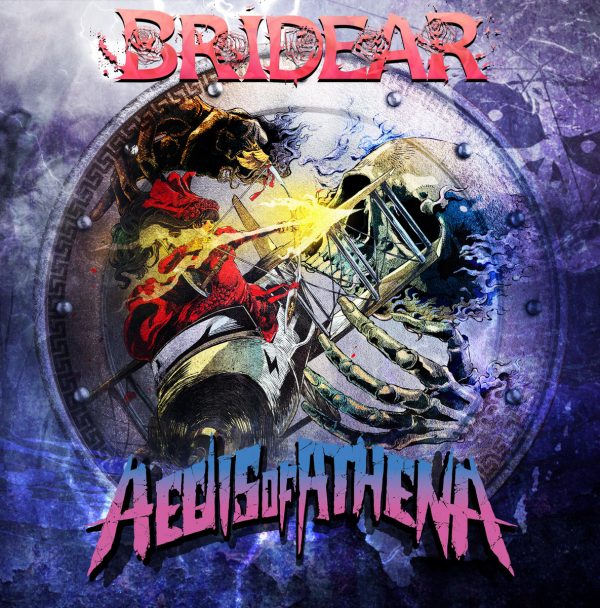