It is, indeed, a rockabilly riot. Welcome, once more, to Brian Setzer’s technicolour world of gals, fast cars, felines and Gretsch guitars. This is The Stray Cats frontman’s, erm, umpteenth solo album and his first for some time to return to the tried and tested three-piece rockabilly format, just as God (or Elvis, or Eddie, or Buddy) intended.

Having recently recorded and toured with the Stray Cats appears to have fired up Mr.Setzer’s love of stripped-back contemporary rockabilly because that, for the most part, is what we have here. But then, having said that, our erstwhile guitar slingin’ hero hasn’t really taken that many jazz funk detours during his career.

So, what do we get here? 11 all-original tracks is what you get, recorded in Minneapolis and Nashville, produced by Julian Raymond (Glen Campbell, Cheap Trick) and covering the whole gamut of subjects from motorcycles to…hot rods. Oh, and tinnitus – the rumble of the title referring to the thrum of an overdriven motor and also the rumble of a semi hollowbody guitar through a large amp – a sound Setzer feared he may never get to hear again.

But all is well – guitars are well and truly plugged in and the joint is jumping. We roar from the starting line (appropriately enough) with ‘Checkered Flag’, age has added a welcome touch of grit to Setzer’s voice and his guitar twangs as unmistakably as ever. The production is lovely – full and deep with the ever present guitars cutting through nicely. ‘Smash Up On Highway One’ adds a touch of heavy surf rock to proceedings.

And on we go, songs feel like old friends. Every now and then you hear a lick you think you  recognise…was it on a Stray Cats album or is it classic Scotty Moore? Who knows, Setzer’s genius lies in writing those licks that you almost know, but before you can pin it down he’s moved off into another. He can write this stuff in his sleep, it’s in his fingers, in his blood.

There’s lot’s more rock. ‘Turn You On, Turn Me On’ balances on a switchblade sharp Bo Diddley beat, it’s lyrics dripping with innuendo – is he singing about a car or a woman? ‘Rockabilly Riot’ is exactly what it says it is while ‘Off Your Rocker’ is the most Stray Cats-alike track on the album.

But it’s not all foot-to-the-floor rockabilly, no way daddio. There are several doffs of the cap to Americana in all of it’s configurations. ‘The Cat With 9 Wives’ (is he contractually obliged to write a song about a cat on every album?) touches on jazz while strings turn ‘The Wrong Side Of The Tracks’ into a mini epic, a West Side Story with guitars. The album ends with another self-explanatory track – ‘Rockabilly Banjo’. It’s more bluegrass than anything else, music to run moonshine to. So, all in all, pretty much exactly what you expect from Setzer, peerless rockabilly with a few twists which is, if anything, slightly stronger than ’40’, The Stray Cats last album, which in itself was pretty damn good. Rock ‘n roll will never die while cats like Brian continue to carry the torch.

Released on 27 August 2021 by Surfdog Records 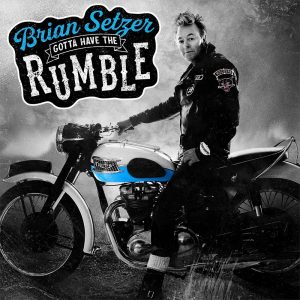