The Midlands Rocks old writer’s submission guide advised one not to pre-amble discussing the weather and your journey to the venue. We concur with those sage words of yesteryear and leave you to fill in the expletives of your choice for why we missed support acts Thunderchunky and Blue Nation.

It looks like they had a good crowd however, and I was little worried tonight’s show might be light on numbers. Drummers simply don’t have the same cache as singers and guitarists when it comes to flying solo without your name band. So, Brian Downey, the man at the back in Thin Lizzy has put a new outfit together and they’re going out under the name of Alive & Dangerous and guess what songs they’re going to play… A heritage band once removed, some might cry out but the applause received as he walks on stage is as genuine as it is loud.

His bright red shiny drum kit’s highly visible from where I stand those of us who only heard him from the back of an Odeon’s hall back in the day are in for a treat at this club gig. Either side of the stage are a couple of skinny long-haired dudes with beaming smiles peeping out from within mountain men beards while touting Gibson Les Pauls hung low. Centre stage, indifferent or trying not to catch the audiences gaze is a bloke in a white shirt and jeans sporting a shaggy afro hair-do who could be the grandson of you know who and he knows the moment he opens his mouth it’s sink or swim time.

They play their opening chord – and even if we’d momentarily forgot what to expect we reconnect immediately – as they unleash the full frontal attack of ‘Jailbreak’  following through with a grooving ‘Are You Ready’. Immediately we are summing up, and comparing a long line of former Lizzy guitarists with Brian Grace and Phil Edgar.  As for Matt Wilson, well, the fact he’s lacking bullet-belted leather trousers tells us he doesn’t want to be seen as being in a covers band and while he can play the songs he delivers the vocal lines his own way, revealing a good set of pipes. As for Downey, getting to see him relatively up close it’s impressive; there’s finesse, strength and drama in his playing and watching his movement you listen all the more clearly to his contributions and they’re immense.

The guitarists tend to stick to swopping lead and rhythm roles with less of the harmony sound the Robertson/Gorham axis initiated as winning formula. While they take the original solos as root they play in their own manner. Robbo once said in an interview that if you make a mistake you work it into what you’re playing and there’ll be the odd moment during a solo tonight that they need to catch up with themselves and do – but it’s live, and it’s worth remembering Live & Dangerous was tweaked in the studio. Not that several couples to my left give a damn as they dance to a particularly mellow version of ‘Southbound’.

There’s another almighty roar as we’re asked to give it up for Downey prior to the lowdown cruise that is ‘Rosalie’ coming across as assured rather than the frantic arrogance of youth. These last two numbers offer us a great opportunity to evaluate Wilson’s voice and at the risk of falling into racial stereotypes he sounds rather like Bob Tench (Jeff Beck Group, Hummingbird), but then Van Morrison is probably the touchstone for all of them.

Downey’s crashing cymbals lead everyone into the fantasy warrior mini-epic of ‘Emerald’, the guitarists taking turns to show off their prowess. Then as the familiar bass line starts we’re into ‘Dancing In The Moonlight (Its Caught Me In Its Spotlight)’ and pretty much the whole audience begins to sway doing their daddy (and mommy),  Edgar adding secondary vocals that work well. They follow through with ‘Massacre’ and those songs with longer instrumental melody sections give the front line more opportunity to move around, interact and throw some shapes.

‘Still In Love With You’ recalls the flavour of a fine wine rarely tasted these days. It’s mellow if not chilled in its arrangements, the musicians weaving an aural tapestry, while a couple lost in themselves down the front make out. Solos are less effects laden, save for the old wah-wah pedal on numbers like the rather excellent ‘Johnny The Fox  Meets Jimmy The Weed’ brought into play by Downey and pumped along by a lovely lumpy deep funked bass, then chopped and served up delightfully by funky West coast hard rocking guitars.

“I don’t have much experience with Midlands crowds,” Wilson tells us, claiming Stoke sung their hearts out on their last gig. Thus for ‘Cowboy Song’ a bunch of Cannock lads and lasses croon in their best country & western pastiche about coyotes calling out in the night, then shout themselves raw as things rock up.

The mood firmly set Alive & Dangerous go in for the big one, and the audience find their second wind to sing along to ‘The Boys Are Back In Town’. Me, I listen intently as to whether or not Wilson will utter Lynott’s infamous live add-lib in this #MeToo world we’re currently gauging our way through and while does tell the girls to “get your knickers down” it’s uttered swiftly with a walk away from the mic as soon as said. He shouldn’t worry; three younger ladies nearer the front certainly couldn’t care less having a great Saturday night out. The song’s closing guitar section has an Allman Brothers feel to them, whereas the opening chords to ‘Warriors’ come on like Rush  before going for a jazzier nuance accentuated by Downey’s drum rolls. Then with bass and guitarists manning the front of stage they get heavy on the chord play and funky with the notes. Again we’re asked to give it up for the man at the back, and we’re happy to do so, a lot of love being felt. 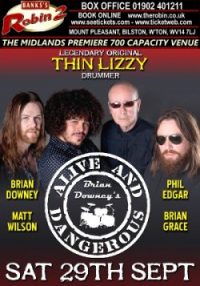 You’re second guessing what song they’ll do next from a shuffled pack of well used cards, but as the guitar shuffle of ‘Sha La La’ flips out from the guitars there’s little doubt we’re on the home stretch now. Downey delivers his expected solo that entertains aurally and is aided by the fact we can see him up close – My wife smugly standing beside me remarks “Of course I’ve seen Buddy Rich live at the town hall” giving her age away, “Yeah,” I reply “but you said you were bored”. She’s not tonight. The drummer stands to receive his due applause at the end.

‘Don’t Believe A Word’ comes next with a more blues rock feel to it, pitching it somewhere mid-point between Lynnot’s original slow version (that Gary Moore used on Back On The Streets) and the Brian Robertson/Downey jam that rocked it up with a variation on the ‘Rock Me Baby’ riff to make it a hit single. Either way, it still retains the best wah-wah guitar solo ever recorded to my mind.

The punk blues collision of ‘Suicide’ comes next. Wonderfully snappy drums with guitars grooving in and out – Lesser songs like this and ‘Sha La La’ being less formulated in our minds are able to take on a freer spirit in this manner. Each guitarist peeling off licks, Wilson thanking us for supporting live music and name checking the support bands, one final might drum roll from the man at the back before being told “You’re fabulous – We’ve had a great night!” and with Grace still beaming a great big grin you believe them.

It’s  a packed house, earlier on Wilson told us they only about five t-shirts left at the merchandise stand they’d be doing a meet and greet at later but the noisy cheers and clapping (folk rarely stamp their boots these days, why is that I wonder?) tells them we require an encore before any of that can take place. They then surprise as pulling ‘Got To Give It Up’ out the bag – Lizzy’s confessional song with a promise to give up the drugs and alcohol that Lynott couldn’t keep to and that burnt out his amigos. Wasted talent, we all know that, something too many grown men have cried buckets over having lost their hero, but you can’t bring him back, just relive him in his songs. Downey is still muscularly kicking up a first class storm behind his kit as the staccato like chords play out and delivers one more triumphant roll around the kit.

Then lest we get too maudlin over the song’s lyrics they counter it with ‘Bad Reputation’, reminding us sometimes you should play hooky off school. Oddly, Wilson roars out vocally on this one and it’s the only time he really sounds like Lynott, that or the spirit of the man inhabits him for the moment, as if a declaration of who and what they were at their finest but let’s not get overly sentimental, there’s enough people doing that here tonight, while having a good time too it should be added, and they’re refusing to go until they get ‘The Rocker’. Downey propels it, the guitars chime and chop briskly on stage and air guitarists come to life every which way you look in the crowd. It does the job, good and proper. “We’ve been Alive & Dangerous – Thank you!” calls out Wilson, cue applause, Downey’s drum sticks thrown out, a bow and that’s it.

Tonight we can take stock. Brian Downey reminded us he’s the best living rock drummer in the United Kingdom. And sure Alive & Dangerous are keeping the Thin Lizzy flag flying though possibly with a Celtic soul that got feigned too often by Lynott and the lads. Downey’s group played with a sense of integrity, imbued with a passion for the blues and a love of the songs. Where that takes them into the future to go beyond that time will tell.