I first witnessed Brave Rival back in late 2018 in Oxford as support to The Billy Walton Band at The Haven Club. Even in those formative days it was obvious that there was something a little special about this Portsmouth blues rock outfit. Forward fast to April 2022 and I find myself once more at a Billy Walton Band gig, this time at the prestigious 100 Club in the capital’s Oxford Street as a visibly more confident Brave Rival once again take to the stage in support. The reason for their swagger tonight is that they will soon be releasing their debut studio album Life’s Machine. However, the journey to this point has not been straight forward. By the time of the release of the Live At The Echo Hotel Music Club album recorded at their debut headline show at the venue the slimmed down (minus keyboards) Brave Rival were receiving a great reaction from the public and press alike and building momentum but two months later the world shut down putting their progress on hold. Over the following two years the line-up of Chloe Josephine and Lindsey Bonnick on dual vocals, Ed Clarke on guitar, Billy Dedman on bass and Donna Peters on drums used any available time to piece together what would become Life’s Machine. With the band augmented by the Hammond/keyboards of Jonny Henderson (Elles Bailey, Matt Schofield, Ian Siegal) and the piano of Ian Shepherd as well as the Bravian Choir (Amba & Leonie Tremain, Bradley Jago Jackson, Marlene Hill, Olivia Haggarty and Faye Carpenter) which has added to the depth available in what is already a strong quintet they finally release Life’s Machine to the world.

Only four tracks from the 2020 live release have survived to make the studio debut including the barnstorming opener and latest single ‘Heart Attack’. Immediately shouting the bands blues/rock credentials from the rooftops but still allowing room for a hint of something a little more progressive within their rock template. The enforced extension in the development of the Life’s Machine track list shows up in the consistency of the final selection which is borne out by the first video released from the album the catchy ‘Guilty Love’ showcasing the talents of the Bonnick/Josephine dual vocal team. The hard rocking ballad ‘Without You’ brings out yet another face to the band and has become a live favourite with those trademark harmonies once again leading the way. Pounding guitars drive ‘Run And Hide’ before ‘Come Down’ finds the Rivals at their bluesy best with Chloe Josephine’s voice being ideally suited to the lead role supported by the Peters/Dedham power house which supplies a solid foundation throughout the album. ‘What’s Your Name Again?’ was one of the standouts at the recent 100 Club gig and must have secured the Portsmouth outfit a number of new fans within the enthusiastic crowd proving that the band can certainly do deep down and dirty. Halfway through and there is no sign of a drop in power or quality on ‘Secrets’ which is rock in style but blues in sentiment. Last of the 2020 live set survivors ‘Long Time Coming’ pushes Lindsey Bonnick’s soulful vocal centre stage enhanced by Josephine and the Bravian Choir on a heartfelt tale of separation. Pumping percussion leads into the classic vocal duality for the highly commercial ‘Thin Ice’ followed by the gospel inspired ‘Fool Of You’. Returning to the blues one last time ‘Break Me’ is the tale of two women caught within a love triangle and builds until the Bravian Choir (recorded at St. Mary’s Church in their hometown) take things back into gospel territory and Ed ‘The Shred’ Clarke lets loose on the hottest solo here. Title track ‘Life’s Machine’ closes out the twelve-track release with a tale of the pandemic bringing in the grand piano of Shepherd to add to the feel of loss as the song builds to a crashing conclusion. The fact that the dozen tracks presented here are so strong is testament to the editing skills (selected from around 50 tracks) of a band who to all intents and purposes are in their formative years.

Brave Rival are a young band with a mature heart which is perfectly displayed on what will surely be one of 2022’s top blues-based albums. Remember the name and watch out for them at your local venues (if you don’t see it request them) because it’s always good to catch a band on the way up. They will be out headlining their own shows once again in May and back at the Echo Hotel Music Club in Hook in June for the official album launch. 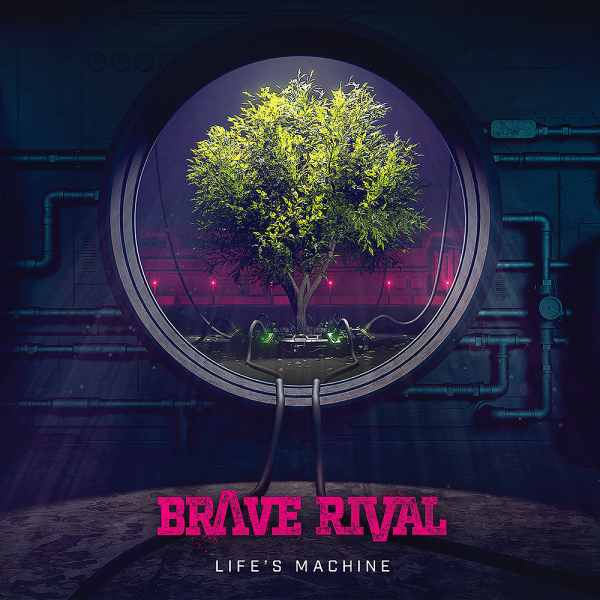