There are two great myths that could easily haunt a band like Braids.  Firstly, that pop music is a problem.  Secondly, that synths lack emotional depth.  Thankfully, these myths don’t cause any issues for Braids because they are one of the bands you could drag out as a counter example to both.  For over a decade now, they’ve been producing an electronic sound whose reference points are entirely organic.  Rolling clouds, swelling oceans, spilling volcanic eruptions and human tears are all captured in the digital codes that underpin the voices that their keyboards and computers produce.  Their billowing horizons of sound are littered with dancing stars, hailstorms and fireflies of melody that waltz around themselves like planets.  That’s the Braids sound before you even put the vocals on top.

The evolution of the band- to continue the organic metaphor- has been towards a more mainstream pop sound, perhaps beginning with 2015’s Deep in the Iris.  Compared to the previous album, the Bjork-ish and brooding Flourish//Perish, the album managed to compact their clicking rhythms and cumulonimbus synths into shorter bursts and with much clearer structures.  They were controlling the elements more, and if I’m honest, when the double A-side “Collarbones” and “Burdock and Dandelion” came out, I thought we’d lost them to pure bland Taylor Swift territory.  As someone who had found their earlier work to be something that straddled pop accessibility and challenging electronic noodling (peaking in Compaion EP) I was terrified at what they would potentially become.

Then I heard Shadow Offering.  Gone were the vocal ticks of previous records, but in their place there is a battle-scarred and mature Joni Mitchell (listen closely to “Eclipse (Ashely)”, “Ocean” and the outro to the epic “Snow Angel” and you’ll hear it).  Raphaelle Standell-Preston has always been one to offer honest gut punches in her words, much like Mitchell herself, never holding back and never being afraid to make the audience uncomfortable.  Sometimes the self-evisceration can be difficult to watch, perhaps even embarrassing like watching someone cry in the street, but the fearlessness of letting go is there in every line.  “Should I even have a child at all/This world is full up/I want to be a mother/But I shouldn’t bring in another”.  She is spiralling out of control as “Snow Angel” unfolds, taking us through Trump’s election, the melting of the ice caps, and the self-loathing one feels at one’s own attempt to try and make the planet a better place with our futile eco-aware gestures.  The relentless pursuit at confession is why Taylor Swiftism was never an option here.  The truth is too unfiltered, too brutal, to be leaking out of the speakers in Primark or hovering behind Phil and Holly as they tell you what’s coming up later in the show.  The sound is pure pop, but it ends there.

The band steers a course towards a more mainstream sound, thanks to production duties from Chris Walla (Death Cab For Cutie).  It means that some of their best underestimated features are appearing in the foreground: uplifting choruses; melodic hooks; catchy lyrics.  However, it means other things are drifting away: the slight foreboding chill that hung in the air; a subtlety and minimalism they once had; and, most devastatingly, the gradual fading away of one of the greatest live drummers the world has today in the form of Austin Tufts.  If you return to those early LPs, you will find jaw dropping moments of stickmanship that would have automatically elevated them to the status of brilliance even without the high quality of songwriting they produced.  Sadly, apart from some odd moments, those killer drums have slowly disappeared since Flourish//Perish and haven’t really returned.  Maybe that’s the price we pay for their new sound.  However, Taylor Smith and Standell-Preston are still knitting rainstorms into melodies so that the internal turmoil of a woman both proud and confused by her own politicised self can be sung in a way that catches the ears, minds and hearts of listeners.  The times, and Braids, are a-changin’. 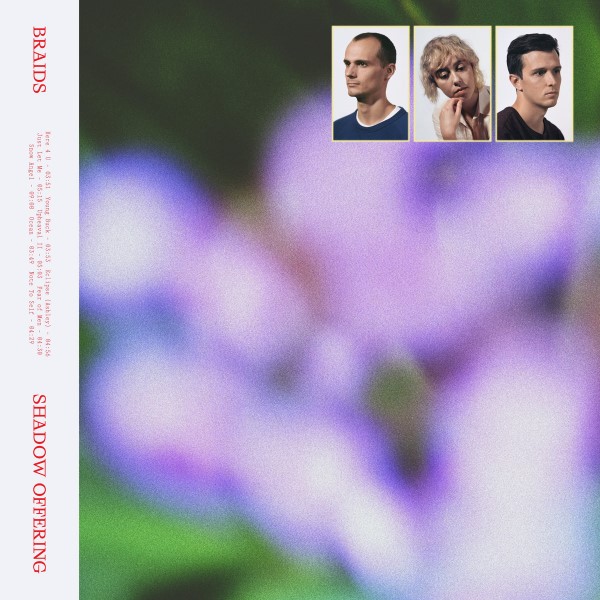