A riff smorgasbord? A riff pretzel?

Accidentally released from the asylum by Gary Cordwell

It’s not going to be easy, writing a short, concise, informed review about the brilliantly named ‘Herb Your Enthusiasm’ – the second album by Wigans Boss Keloid. So I won’t. An album this sprawling, crawling, complex, overwhelmingly heavy and…boss, deserves a sprawling, chaotic review.

Opener ‘Lung Mountain’ leaves you breathless and overawed. An immense bass intro leads into an immenser(!) riff. In fact, this is a riff smorgasbord, a riff Vesuvius. Sludge, prog, doom, drone, rock, stoner – you name it, there’s a representative riff here. They emerge and fade away, like bubbles in molten lava.

By track 2 you realize that this is not going to be a standard sludgy offering. Yes, it’s heavy and oppressive and lumbering etc. but it strays dazzlingly from the herd. Perhaps the key to the sound of this whole album is guitarist Paul Swarbrick’s use of an octave pedal. This, along with vague Middle Eastern flourishes, gives the album a totally individual feel. It’s sinister, seductive, haunting and atmospheric. The guitar has an almost synth/organ sound and, when combined with the dark, minimal riffage, it creates a John Carpenter level of pulsating ominous…ness. It’s a devastating, addictive sound. When the heaviness kicks in (and, oh boy, does the heaviness ever kick in!) it’s simply massive!

Musically the band are fearless – their vision is epic in scope and whatever they can imagine is firmly within their grasp. And the riffs! The riffs are endless – Earth shattering doom bastard hellspawn…things that just won’t sit still. They keep coming – effortlessly introduced and casually cast aside – riffs other bands would kill for are used for scant seconds. In fact, damn good bands have built 20+ year careers on fewer riffs than this!

There are miriad shifts in tempo and pace, with complex prog riffery redolent of early Mastodon, although it never detracts from the sheer storming heaviness of the songs. They are almost, if you will, riff pretzels! Tying themselves up into knots of even more riffs. Some are slinky, in a heavy as fuck way – sidewinders that won’t stay still for long enough for you to discern their true form. The aural equivalent of the creature in ‘The Thing’ – murderous, ever shifting and morphing into something feral and mind-bending to evade capture. The main 2 riffs in ‘Axis Of Green’ circle each other before becoming 2 or 3 more riffs.

It eventually ends. Leaving you open mouthed, aghast and brutalised. It’s a draining, exhausting experience, almost too much for one sitting but, trust me, you need to take this ride. Sludge? Doom? Southern Groove? Fuzz Math? What is this thing?…fucking good is what it is. Boss Keloid make a brave, intelligent, endlessly ambitious bid for album of the year. It’s definitely on my list. Oh, and awesome scar by the way… 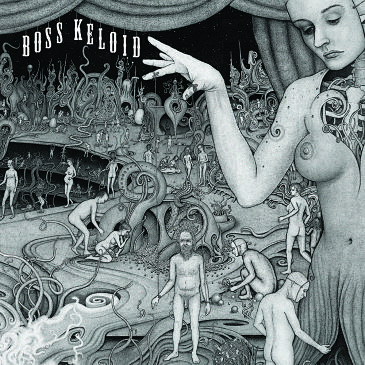