Believe it or not, Wigan four-piece Boss Keloid have been ploughing their individual (and heavy) furrow for over a decade now. ‘Family The Smiling Thrush’, their oddly-titled (more about this later) new album is their fifth and sees them veering slightly in a proggy direction.

It has very timely themes, surely shaped over the past, “unprecedented” 15 months. Positivity, in a word, that’s what it’s about. In a few more words – community, family, communication, debate, mindfulness, contemplation – the collective being greater than the individual, that kinda thing. Hang on, cry the more blinkered among you, this is, y’know, dark heavy music, it can’t be positive. Well, little closed minded ones, prepare to be proved wrong.

Those of you familiar with Boss Keloid’s work will be pleased to know that everything that makes them so good is present and correct here. The melodies and rhythms are…peculiar. The guitars crunch in a hugely satisfying way and there is still much use of an octave pedal, giving those killer riffs their distinctive sound. Opening track ‘Orang Of Noyn’ initially sounds like exceedingly heavy folk music, there are even acoustic guitars. But fear not, the bludgeon is never far away – the thunderous guitars are constructed block by punishing block, chiming guitar sits atop down-tuned bluster and it all ends with a complex, angular brute riff-out. The boys are back.

Most of the songs exist at a thundering kind of mid pace although they’re never predictable. There are quite often moments where the band drop out into a weird, almost mellow noodle, a Doom Grateful Dead, but it’s never too long until the humungo riff-Yeti’s reappear (riff yeti? Ed.). Songs that are already oppressively heavy somehow always manage to get heavier, assailing the listener with swirling storms of FX driven atonal fury. It’s wondrous stuff, up there with peak Mastodon.

The album is full of incredible stop-start dynamics, they frequently build to a howling crescendo only to drop you off a precipice into a rubbery, woozy moment of reflection, a breather before the next onslaught. ‘Smiling Thrush’ has a lava flow of damaged, overdriven guitars – it’s crushing heft pushing the air from your lungs. It chugs, it pulls back and cajoles, there’s oodles of that light ‘n shade, or should I say quiet ‘n REALLY FUCKING LOUD!!

‘Cecil Succulent’ opens with almost a jazz-fusion vibe. Maybe. Like Neurosis jamming with Weather Report. And from there we’re into ever more mammoth heaviness. The riffs and tempos turn on a dime, shape-shifting manically without ever losing their booming, inevitable momentum. You can’t second guess these songs, you’re on a sludgy rollercoaster ride. On it goes until we reach the fearsome ‘Flatt Controller’ and it’s raw, singular riffage. It hits a monumental groove, almost cinematic in it’s grandeur. It finally fades out to a lone, dusty twang and, from there, to a gentle acoustic strum, the storm is over and the ending is perfect.

Boss Keloid are never less than brilliant and ‘Family…’ is up their with their very best. It’s endlessly fascinating. And heavy, did I mention heavy? Great care was taken over the production this time, and it shows, the whole album is driven by the most incredible sledgehammer drums and everything is (as well as being louder than everything else) crystal clear. Except when it’s a sludgy as fuck, which is pretty damn good too. Look at those song titles – weird huh. Very Prog, kinda King Crimson. The words don’t quite sit together, they wrong-foot you, leave you destabilised and uncertain. Tenses don’t work, hell, even some of the words may not actually exist. Except here. Here they exist, and they work, and in fact, they work perfectly. No other combination of words could ever be right and that, ladies and gents, is what Boss Keloid do to a T. 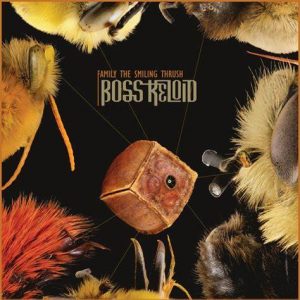