‘Lost In France’, ‘It’s A Heartbreak’, the Jim Steinman penned ‘Total Eclipse Of The Heart’ and ‘Holding Out For A Hero’ are the songs most people will associate with Welsh songstress Bonnie Tyler (sorry I forgot ‘A Rocking Good Way [To Mess Around And Fall In Love]’ with Shakin’ Stevens) but she has continued over a fifty year music career, and has just celebrated her 70th birthday. Despite the ups and downs she is still clocking up the air miles and releasing new material on a regular basis. This new release from Cherry Red, The East West Years (1995-1998), sees two of her mid/late 90’s efforts, Free Spirit (1995) and All In One Voice (1998) paired together along with an additional disc of singles and bonus tracks from the same period in the first re-issue of material from this period.

Disc One, Free Spirit is the most interesting of the three discs due to the famous names associated with many of its tracks and was the first of her albums to be released in the UK and US since Hide Your Heart (released as Notes From America in the US) in 1988. Opening with the raw soul of ‘Nothing To Do With Love’, written by Frankie Miller and Jerry Lynn Williams, before second single ‘You’re The One’ softens the mood. Written by the Scorpions pairing of Klaus Meine and Rudolph Schenker this ballad definitely has something of ‘The Wind Of Change’ about its harmony vocals and twin guitar breaks. The Scorpions would go on to re-record the song (as ‘Are You The One?’) for their own Pure Instinct album. The first single ‘Making Love (Out Of Nothing At All)’ finds Tyler reuniting with Jim Steinman for a typically bombastic run around the piano keyboard. This song was first released by Australian melodic rockers Air Supply and shows that a Steinman tune continues to be the best way to get the most from Tyler’s edgy vocal tones. ‘Given It All’ and ‘What You Got’ fall into the mid 90’s soft rock/pop formula taken on by the likes of Tina Turner and Bryan Adams around the same time before we move on to a cover of the Simon and Garfunkel hit ‘Bridge Over Troubled Water’ a song which has been covered by many artists over the years, Elvis Presley, Aretha Franklin, Johnny Cash and recently NMB (reviewed here) and this version really doesn’t add much to its legacy with a straight ahead carbon copy approach, although it does spring into life a little as it reaches its conclusion. The Jeff Lynne/Kiki Dee writing team give Bonnie a little more to get her teeth into on the Travelling Wilburys light ‘Time Mends A Broken Heart’ leaving you wondering what a full Tyler/Lynne collaboration could produce. Amongst the smorgasbord of song writing talents found on Free Spirit ‘Driving Me Wild’, ‘Sexual Device’ and ‘All Night To Know You’ from Stuart Emerson show the most potential, probably due to its rockier guitar led approach pulled from his NWOBHM background. This borders into Mutt Lange territory on ‘Sexual Device’ which also closes out this disc but with its poor cousin the ‘Vari Mix’. ‘Make It Right Tonight’ and ‘Forget Her’ lead us back into pop rock and ballad land respectively which both seem very average when up against some of the stronger material on Free Spirit. Over eight minutes of what Steinman and Tyler do best should have been the high point of this album with the Bat Out Of Hell classic ‘Two Out Of Three Ain’t Bad’, however what we get here is watered down disco beat effort present in the hope (I presume?) of making single number three a hit. It didn’t work.

Disc Two features career album number twelve All In One Voice. This remains her least successful to date probably due to the fairly average songs contained within it. With Jimmy Smyth at the helm, it sees Tyler mixing her pop background with a new Celtic influence. One thing that has become apparent over the years is that Tyler needs strong songs to allow her voice to show its full potential but in this respect All In One Voice fails. The album opens with the Irish feel of Second single ‘Heaven’ and ‘Like An Ocean’ before it settles into a formula which not even her strong but raspy voice can lift out of its doldrums. Things rise slightly on the Frankie Miller/Will Jennings co-write ‘You Always Saw The Blue Skies’ where the Celtic/pop mix finally seems to click, but the songs soon returns to the norm. The places where this release shines (a little) are on the covers. ‘Angel Of The Morning’ where she makes the chorus soar or Screamin’ J. Hawkins ‘I Put A Spell On You’ (produced by Mike Batt of The Wombles fame) with its orchestral arrangement allowing her voice to dominate and ‘The Rose’, made famous by Bette Midler, this version allows Bonnie to show that her softer side works just as well as when she is rocking out. The album closes out with the single which preceded the album’s release ‘He’s The King’ once again the Celtic/pop hybrid works especially when lifted with an orchestra and a little gospel thrown in and it shows that Bonnie does still have it. That would have been the best way to end the album but what follows is a version of the Christmas classic ‘Silent Night’ which barely deserves a mention. If you want to explore the softer side of Bonnie Tyler then this is as good a place as any to start as between the uilleann pipes and Irish Whistles she channels something of her inner Bassey, but where she usually excels is in full flight using the full power of her husky voice but there is little of this in evidence on All In One Voice.

Disc Three, Singles and Bonus Tracks on the whole is another case of “do we really need that many versions” with no fewer than six extra versions of ‘Two Out Of Three Ain’t Bad’ and a mere three variations on ‘Making Love (Out Of Nothing At All)’ it really is for hardcore BT fans only. Too many disco beats which don’t really add to the tracks but I’m sure were appreciated on the Euro dance floors at the time. The most interesting tracks here are the versions of ‘Limelight’, a cover of the Alan Parsons Project tune from his Stereotomy album which suits Tyler down to the ground and is especially effective in orchestral mode on the Overture Mix. ‘Limelight’ was originally added to the German re-issue of Free Spirit in place of Sexual Device. The other track which is worth a mention on disc three is ‘Heaven (Chamber Mix)’ where once more Tyler’s voice is joined on another orchestral arrangement which really allows her golden tonsils to burst forth and works much better than the version included on the All In One Voice opus.

So interesting but not essential sums up The East West Years (1995-1998) but with her latest album The Best Is Yet To Come (bold statement!) released back in February of this year and dates booked around Europe well into 2022, Bonnie and her excellent touring band are looking to continue their busy schedule as they enjoy spreading ‘It’s A Heartbreak’ and ‘Total Eclipse Of The Heart’ to the masses, but I don’t think much from these two albums will trouble the set list.

1 Nothing To Do With Love

3 Making Love (Out Of Nothing At All)

11 All Night To Know You 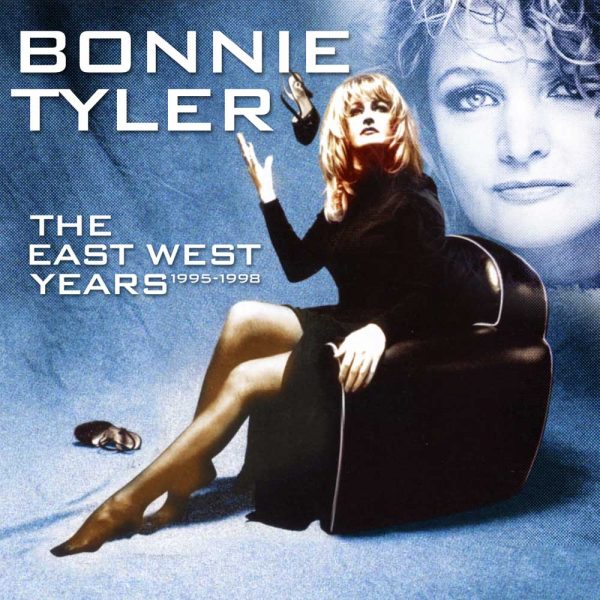