Chicago’s always been known as the Windy City and Bones certainly show they know how to whip up a furious storm all of their own with Sons of Sleaze. The album launches with ‘Poisoned Breed’ a full on blast of manic mayhem which refuses to acknowledge any subtleties whatsoever in preference for blistering all out aural attack. Second track ‘13’ is more of the same, with an eardrum popping guitar solo midtrack, and perhaps that’s where this 12-track release comes unstuck. There’s just not enough here to maintain your interest from this underground trio whose roots are buried deep in the Chicago underground black metal outfit Usurper.

The Bones approach is part-Punk really with Joe Warlord’s frenzied dynamic drumbeat reminiscent of numerous early 80s UK punk acts such as Discharge. Most of the tracks are mini explosions lasting two to three minutes within which all hell breaks loose. ‘1,000 Lies’ and ‘Maggots’ are putrid fireballs of fury and filth but Bones briefly wander across into more solid death metal territory on numbers such as ‘Cold Knife’ which slices through the air with a cold chilling menace. Vocalist Jon Necromancer, formerly with Nachtmystium and Usurper, attacks almost every song like a cannibal feasting on his latest victim. Not content to devour the lyrics limb by limb he goes for the guts and entrails too, not even pausing for air as he takes another mighty bite from the carcass.

‘Bad Signs’ is a rare deviation, a steadier sluggish surge in which Warlord takes a couple of minutes’ well earned respite for his battered biceps, to hold back with a steadier throbbing beat. Best riff on Sons of Sleaze has to be the crusading headbanging crusher that permeates through ‘Mindfucked’, yet another hit ‘n’ run chaotic charge from the Chicago trio.

This is the second full length release from Bones and it’s as barbaric as anything you’re likely to have stumbled across recently. The whole distorted Bones wrecking ball exits with a cover of Terrorizer’s ‘Fear of Napalm’, one of the album’s more polished tracks and brilliantly executed, Necromancer practically eating the mic in his desperation to do the thing justice. 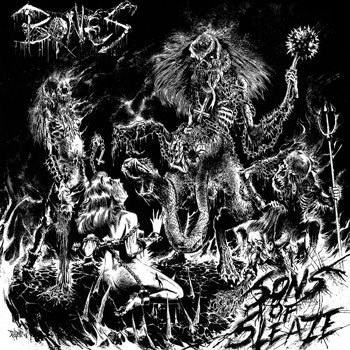