Ed: At Midlands Rocks towers, our reviewers are always fighting about what an album’s score should be. Honestly, it’s like watching a Jeremy Kyle Show special sometimes, except without the Primark fashion parade and toothless violence of course. Bonafide’s latest, the bouncily-titled Bombo, has brought two of MR’s finest together to compare notes. So click play on the video above, sit back and let battle commence.

First up, in the white shorts emblazoned with a red cross, we have the Midlands’ own Dean Pedley. Take it away Dean…

Raucous Swedish rockers Bonafide return with Bombo, studio album number four that comes complete with some striking pulp fiction inspired cover artwork. In the world of rock n roll the combination of sweet riffs, sleazy grooves and a gritty, raw production topped off by spit and sawdust vocals is a tried and trusted formula. What sets certain artists apart from the masses is that extra special ingredient that grabs the listener by the balls right from the word go; and just like Nazareth, AC/DC and ZZ Top before them Bonafide ticks all of the boxes.

Singer, songwriter and producer Pontus Snibb moonlights as the drummer in Nashville-rockers Jason and The Scorchers and that bands ferocious energy and no frills approach is more than apparent here. Feel good lead single ‘Harmony’ is the only time the pace drops below frenetic and provides a brief respite from the crunching choruses, buzz saw riffs and three chord boogie. Lyrically Bonafide go for that tongue in check innuendo that Billy Gibbons has perfected over the years with ‘Backroom’, ‘Liquid Lover’ and ‘Better Safe (Than Sorry)’ delivered with a nod and a wink. Elsewhere the harmony heavy title track and earthy ‘Suburb Baby Blues’ are destined to be future live favourites and showcase some glorious guitar work from Snibb and the Les Paul wielding Mikael Fässberg.

A band that is guaranteed to make you fall in love with rock ‘n’ roll all over again, Bonafide will be supporting The Quireboys throughout October.

Ed: And now, in the blue shorts with a white cross, from north of the border comes Glasgow’s Brian McGowan to make his case…

Bonafide’s guitarist/vocalist/songwriter/producer, Pontus Snibb gets around. His trio, The Pontus Snibb 3 toured in the Spring, and through the summer, he’s been wielding the sticks for Stacie Collins’ European tour, with Connie Bloom (Electric Boys) on guitar. And when he’s not doing that, he occupies the drum stool for Jason & The Scorchers. He’s no slouch with his hard rock band, Bonafide, either. The unfortunately titled Bombo is the band’s fourth studio album. As a vocalist, you could shoehorn Snibb into the small gap between the Angel’s Doc Neeson and Survivor’s Jimi Jamison. As a songwriter&producer, he’s much closer to the Antipodean hard rock of the former. In Snibb’s own words “hard, groovy rock that comes out of the blues and classic rock scene of the seventies”. As an apt description, that’ll do just fine.

You know what to expect then, spare rib riffs, road hardened, scorching across a sun bleached horizon, thick cut sometimes, the force behind sinuous, whiplash tunes and compact choruses. It takes enormous skill to write songs this simple, and they are shaped and formed by a band with enough unique identity to ensure they are not saddled with the copycat tag. The album title, Bombo refers to a mythical nightclub of the same name, and the songs play out lyrically like they’re lifted straight out of Thompson or Leonard. ‘Pulp Fiction, the Old School Rock Musical’. Another first.

The minimalism and the satisfying chord shifts of ‘Bad As Clint’ and ‘DTRD’ contribute to the notion that these are among the album’s standout cuts, but when the beefed up, almost chiming axework of ‘Harmony’ and ‘Liquid Lover’ is rolled out, the music becomes just that little bit more compelling. Catchy closer, ‘B-Ball’ climbs halfway out of the old school groove and takes on more of commercial, melodic rock sheen than preceeding tracks, potentially signposting the way ahead for this talented band.

Ed: Well, wasn’t that quite the tournament, huh? Who’d have thought that two reasoned approaches so well-delivered could have such an impact. That’s a battle we’ll never see the like of again (unless any more of MR’s writers have a difference of opinion). If you’re undecided about whose side you should take, pay a visit to Bonafide at their website here.

Think I’ll put the kettle on… 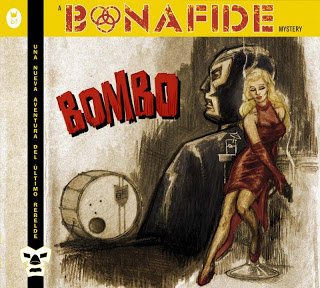