The ‘Rough And Rowdy Ways Worldwide Tour’ began last December in Milwaukee, USA. Since then, Bob Dylan has played 74 stellar concerts across the country, performing to tens of thousands of rapturous fans all delighted to see this genius songwriter and mercurial musician live. 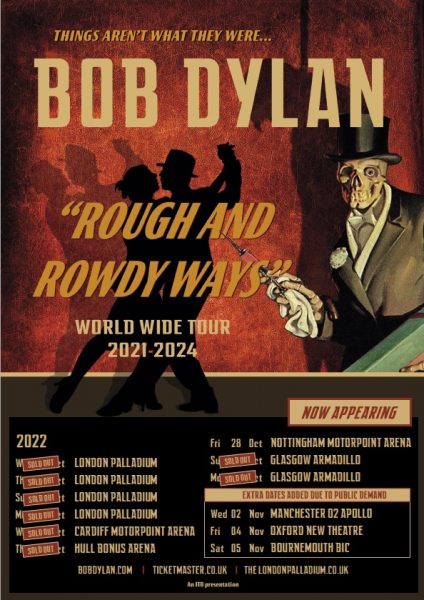 This autumn the Rough And Rowdy Ways tour arrives in Europe, with the first of four intimate shows at London’s famous Palladium Theatre on 19 October. Thereafter Bob Dylan will travel to Cardiff to play the Motorpoint Arena, followed by concerts in Hull, Nottingham and two shows in Glasgow, to now be followed by newly-announced dates at Manchester Apollo, Oxford New Theatre and Bournemouth BIC.

Tickets for the additional shows go on sale on Monday 5th September at 10:00am

All shows will start at 8pm.

All shows are non-phone events – the audience will have to put their phones into a Yondr bag, which they can keep with them until after the show.