Reviewed by Brian McGowan. Released by Up/Down Records on 17 August 2018.

Judging by the cover of this, Blue October‘s ninth album, Edvard Munch is still knocking out those intensively reflective faces, and inside, the band’s artistic transformation, and mainman Justin Furstenfeld’s personal journey continues.

2016’s Home was part 1 of that trip from the dark to the light. These new recordings show that he’s almost burned off the memories of his troubled past to reveal an incandescent core. The band light up song after song with pained confessions (How To Dance In Time) and an urbanity of tone (I’ll Do Me You Do You) that’s awash with simmering atmospherics.

With Furstenfeld producing, they’ve broadened their sonic pallette. Effervescent bubbles of electronica rise up through songs, bursting on the surface (Your Love Is Like A Car Crash, I Want To Come Back Home), encouraging Furstenfeld’s vocals to soar above the foam like an old romantic from the heyday of Nouvelle Chanson. ‘Daylight’ and ‘I Hope You’re Happy’ are the most immediate tracks, mixing big, bright pop choruses with bittersweet lyrics (and perhaps just the slightest nod to Dave Pirner).  The playful, whimsical ‘Let Forever Mean Forever’ cuts against the grain of the surrounding material. Together with the album’s nine minute, climactic track ‘Further Dive’, the music’s lush restraint and lilting pathos seem out of place. But Furstenfeld’s voice, weathered by experience and the ageing effect of hazardous substances, helped along here by soughing strings, gives both songs heft and gravitas.

The sub rap/spoken word schtick of ‘Colours Collide’ works like a dream, and coupled up with ‘King’s inventive sonics, bleeding into an explosive chorus, could see them becoming the exotica that brightens up many a future festival.

With the help of the rest of the band, it’s clear that Furstenfeld has wrestled his personal demons to the studio floor. And counted them out. ‘I Hope You’re Happy, the album, sounds like he’s spent his life getting to this moment. 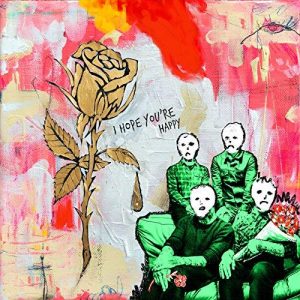