Sacred Mother Tongue may be a little too mainstream for some Bloodstock tastes but they probably won over more fans than they lost with a lively lunchtime set on the Ronnie James Dio Stage.

Launching straight into ‘Demon’, the opening track from the Out of the Darkness album, Sacred Mother Tongue confidently hammered out some great grab-you-by-the-nutsack metal with rousing riffs and more energetic fist-pumping than in an East London boxing club. Frontman Darrin South leaves the elaborate stage set and pyrotechnics to others, preferring simply to sing for his supper and rely on the musical talent of the whole band to win over any doubters. While South has one of the cleanest singing styles heard over the three days it’s offered against a pretty heavy backdrop.

‘Bleeding Out’, ‘Believe’ and the new single ‘Seven’  rubberstamped SMT’s credentials on their Bloodstock bow and Midlands punters will get the chance to catch up with them again in October when they visit the Birmingham Academy3 on a co-headlining tour with Voodoo Six. 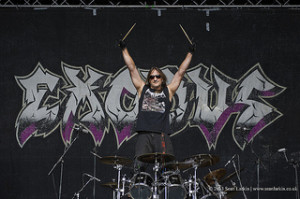 Exodus are no strangers to Bloodstock. The Bay Area thrash legends seem to get faster and more frantic every time I see them. Rob Dukes is a supersized tank of a frontman pumping up the crowd at every opportunity.

Having blitzed through the likes of ‘A Lesson in Violence’ and ‘Blacklist’ Dukes took a breather to get his ducks in line to induce a tornado-style Exodus circle pit for ‘War is my Shepherd’. With heads still spinning from that anvil crushing beast, Dukes then heralded recently departed Jeff Hanemann and former Exodus frontman Paul Baloff for an almighty pounding of live staple ‘Bonded by Blood’.

Anyone seeking an alternative to good old thrash could probably be found squeezed into the Sophie Lancaster tent where a succession of staggering sets took hold on the festival’s final day.

Bossk were probably one of the least metal looking bands at Bloodstock 2013 with their button down shirts, tidy haircuts (in the main) and barely a facial whisker between them. However, they showed they were more than deserving of their Sunday slot on the Sophie Lancaster Stage with a mesmerising display of guitar grooves that proved hard to walk away from for most people.

The first half of the set was an entirely instrumental affair, with a cascade of mixed up dizzying riffs that ranged from moments of aching melancholy through to savage outbursts of anger. If this was your first experience of Bossk then you could be forgiven for thinking that this was a vocal free performance until Sam Marsh ambled on from the wings and proceeded to screech intense vitriol down the mic. Marsh left the stage after his brief intervention returning just once more towards the end. With the band at times barely visible through the thick cloud of blue smoke, and regularly turning their backs on the audience when playing, Bossk are the very antithesis of what mainstream music represents.

They played with a near mindblowing intensity with riffs that switched seamlessly from chilling beauty through to devastating thunderous assaults. The layers of heavy doom were crafted together with the precision, poise and purpose of a Savile Row tailor. Bossk managed to deliver a set of genuine power, merging maturity with mayhem. I’ll look forward to their next Midlands appearance when sharing an Asylum bill with Dragged Into Sunlight next month.

If Bossk looked like they had just stepped off the pages of a Paul Smith catalogue then Gormathon, by way of contrast, looked like had they spent the past fortnight living in a cave and surviving on small rodents and wild berries. The Swedish warriors approached their set with an enthusiasm that was infectious none more so than impressive vocalist Tony Sunnhag.

If this guy ever tired of life in a Scandinavian black metal band then he’s a shoo-in for the part of Gandolf the next time someone looks to transfer the Lord of the Rings from paper to silver screen. His thudding dance steps are unlikely to see him a secure a place in the next Strictly Come Dancing line-up but Seehag is clearly a man who loves what he does and the fans evidently love him for it. Songs such as ‘Skyrider’ and ‘Celestial Warrior’ drew the crowd in and after winding up with the self-proclaiming ‘Gormathon’ the Hellsingland headbangers tossed a few t-shirts into the outstretched arms in the pit.

The black metal blood running through the Sophie tent thickened further when Belphegor took to the stage. Few bands can have quite so many songs paying homage to Lucifer as the Austrian agitators. With an array of satanic imagery joining them on stage Belphegor turned the heat up in the tent with a swagger that could only be admired on an already hot afternoon kicking off with ‘Feast upon the Dead’. Belphegor play a vile mix of death and black metal that simply crushes the life out of anything within spitting distance. Epic offerings such as ‘Impaled upon the Tongue of Sathan’ had every head in the room banging arching back and forward in admiration. The Austrian agitators, celebrating their 20th year, left Bloodstock fans crying for more with the parting ‘Bondage Goat Zombie’.

Having found time in between band interviews to enjoy a good section of DevilDriver’s set on the main stage where the Californians served up a couple of storming numbers from their new album Winter Kills with ‘The Appetite’ a highlight.

DevilDriver don’t know the meaning of an off-day and Dez Fefera remains one of metal’s best loved frontmen.

Clashes are something of an occupational hazard at open air multi-stage festivals. But the head-to-head between Slayer and Dying Fetus certainly had more than a few Bloodstock punters almost tossing a coin.

Having greeted Slayer onto the main stage, I took in the first couple of numbers, before making a hasty hop to the Sophie Stage to see Fetus.

The tent was already rammed and Fetus were in stunning form, as awesomely destructive as ever.

‘Killing on Adrenaline’ and the blitzkrieg barbarism of ‘Kill Your Mother, Rape Your Dog’ sent the pit into overdrive while the traditional crushing breakdowns threatened to have the same impact on the Catton Park ground as a spot of fracking.

Hopefully it will have recovered by next  August – See you next year!