It’s that time again already, when BLOODSTOCK kicks off its grass roots-supporting ‘Metal 2 The Masses’ scheme, which gives unsigned and DIY bands the chance of being part of the BLOODSTOCK festival experience.

M2TM 2022 was without doubt the biggest BLOODSTOCK New Blood initiative to date and we managed to capture the bands, the fans and grab a chat with a few of the promoters hosting the events, alongside chief M2TM organiser Simon Hall. Check out the ‘Highway To BLOODSTOCK’ video and get a handle on another phenomenally successful year for the initiative. 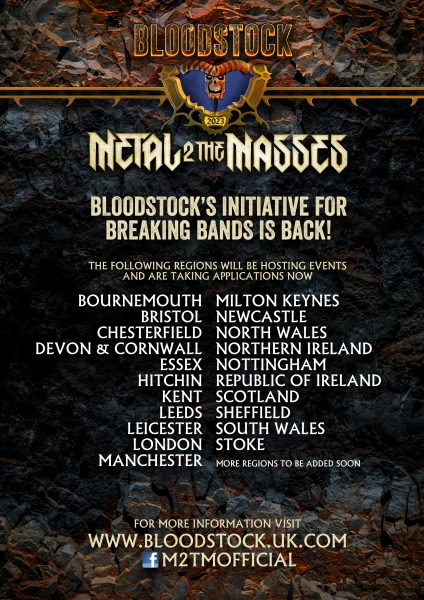 Plans are already locked with many local promoters and BLOODSTOCK is set to track down the hottest new metal talent in the land, who’ll grab themselves slots on the New Blood stage across festival weekend in August 2023.

There are a total of 21 regions are secured so far, with more locations expected to be added in due course. See the full list of participating regions to date below, and if you’re in a self-released or unsigned band and want to try out for a slot on the BLOODSTOCK bill, get in touch with the event nearest you and get yourselves involved!

One winner from each region will secure themselves a slot on the New Blood Stage and some of the very best runners-up may also get lucky, space permitting.

Bands should get their applications into their nearest regional promoter ASAP, as heats kick off in the coming weeks. Any local promoters in regions not yet represented can email Simon Hall (simon@bloodstock.uk.com) for information if they wish to host the scheme in their local area.

Full details of venues and who to contact to enter in each region, can be found here or on Facebook. 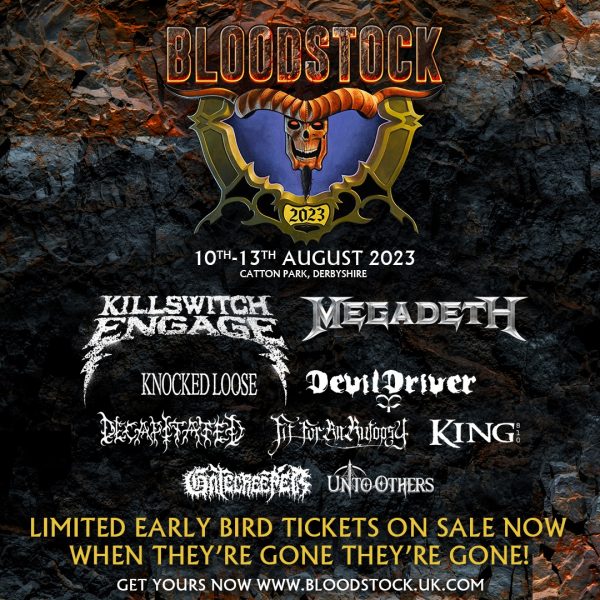 BLOODSTOCK’s 2023 Ronnie James Dio main stage headliners are KILLSWITCH ENGAGE and MEGADETH, with the third to be announced in the coming months. Also on the main stage are DEVILDRIVER, FIT FOR AN AUTOPSY, DECAPITATED and GATECREEPER, plus over on the Sophie Lancaster stage, expect to see ZEAL & ARDOR, KING 810 and UNTO OTHERS. Many, many more are yet to be announced.

With tickets selling faster than ever, all VIP packages and campervan passes are already sold out and Early Bird tickets are down to their last few, at a discounted price. Grab yours now at the ticket store.

BLOODSTOCK will take place at Catton Park, Derbyshire on 10-13 August 2023.

For the very latest ticket and line-up news, click to www.bloodstock.uk.com