Formed in Bergen, Norway in 2008, Blood Command have built their reputation on highly frenetic live shows and it’s an energy they’ve easily replicated on three albums. Long player number four, the aptly titled Praise Armageddonism, has been years in the making, and therefore comes heavily laden with a weight of expectation. With new singer Nikki Brumen at the helm, this record is all you’d expect (and more) from a bunch of death-disco punks, and should blast this quintet into the stratosphere.

Blood Command cite both hardcore punk legends Refused and disco chart bothers Boney M as inspirations (along with an obsessive fascination with suicide cult Heaven’s Gate). That may sound like a strange amalgamation, but they’re blended to great effect on opening salvo ‘Praise Armageddonism (Awake Theme)’. A ministerial voice preaches war and pestilence over a dirty bass rumble and sets an apocalyptic tone before bursting into life like a nuclear explosion. This is punk in its purest form; it’s has been distilled of any impurities and focuses its energies into a finely honed laser beam. However, Blood Command will never be confined by genre constraints and the track takes on a decidedly techno beat as it reaches its conclusion, and the sonic shift is down-right startling. That disco direction is amplified as we’re greeted by walls of synths on following track ‘Saturday City’, and those synths fan out in a colourful spectrum and are underpinned by a bouncy beat that’s delivered with a pop sensibility. Subsequently, Praise Armageddonism is a record that’ll spin you round and round and then throw you in a hex.

I was a big fan of Australian band Pagan and it came as a shock when they called it quits as they were on the point of global recognition. Therefore, I was fully stoked when I learned that Pagan singer Nikki Brumen landed the vocal spot in Blood Command. Both bands inhabit the same kind of crossover territory and while Nikki re-recorded the vocals for the album after Karina Ljone left, she’s stamped her own personality on proceedings and Praise Armageddonism could easily have been written for her. Nikki was schooled in metal and the blackened aesthetics of ‘Burn The Blasphemer’ (another facet of a constantly rotating album) are the perfect vehicle for her throat-shredding vocals.

Praise Armageddonism is an album that constantly throws the listener curve balls. Just like their image (the band are all shell suits and big trainers) the band toy with the listeners perceptions and seem to take great joy in blowing your expectations out of the water. And final track ‘Last Call For Heaven’s Gate’ further throws the listener in a maze with plenty of time changes and some blue-eyed soul infused saxophone (where the hell did that come from?). Mixing genres is no easy task, if a band gets it wrong the result can be an unlistenable stew, but Blood Command seem to have it down to a fine art, and the epic ‘Last Call For Heaven’s Gate’ locks together like a finely woven tapestry. The manic preacher who introduced the album returns at the album’s conclusion to cast us into a pit of fire, and brings Praise Armageddonism full circle.

In an age when bands don’t write albums any more, Praise Armageddonism is a rare beast that hangs together as a cohesive whole. It has the feel of a concept album and will hold your attention over its 36 minutes, and with new vocalist Nikki Brumen aboard it seems the world is Blood Command’s oyster. 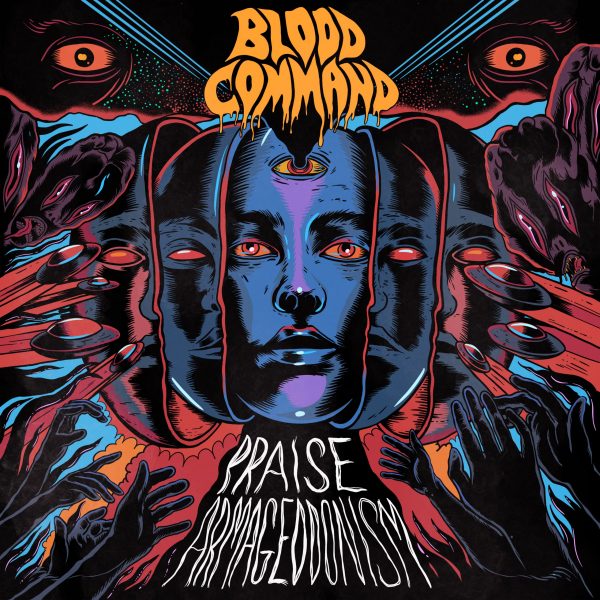