Blondie, one of the most influential bands to emerge from New York’s punk scene, have announced their 10 date UK tour is to be postponed until April – May 2022, their first UK tour in 5 years. Iconic frontwoman/songwriter Debbie Harry, guitarist/conceptual mastermind Chris Stein and powerhouse drummer Clem Burke, are eager to get back on the road, along with long standing band mates bassist Leigh Foxx, guitarist Tommy Kessler and keyboardist Matt Katz-Bohen.

Blondie welcomes legendary guitarist, The Smiths co-founder and Blondie collaborator, Johnny Marr for the rescheduled dates, as Garbage will no longer be a part of the tour due to scheduling conflicts. 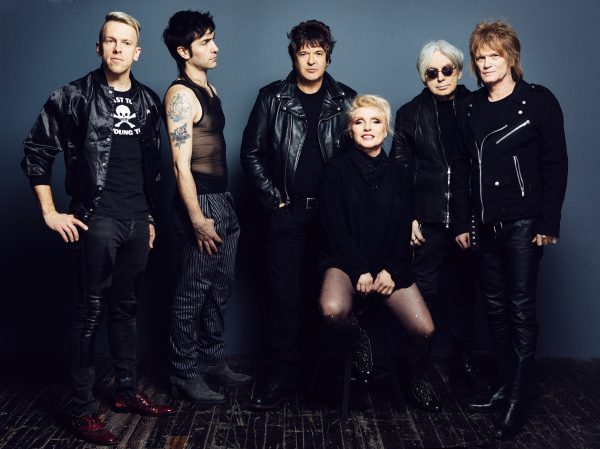 Debbie Harry says, “Having collaborated with Johnny on Blondie’s last album, Pollinator, and with plans for a new collaboration on our next album, we are looking forward to a long overdue return to the UK, and even better, to sharing the stage with the inspirational musical influence that is Johnny Marr.”

Clem Burke adds, “It is a disappointment to have to postpone our UK tour until April 2022. We will now be joined by our special guest & friend Johnny Marr. We’re happy to continue our relationship with Johnny that began with his contribution to our last album Pollinator. Looking forward to seeing all our UK fans in the Spring.”

“I’m delighted to be going out with Blondie, to hear those classic songs every night, and be in the presence of twenty first century heroes.” – Johnny Marr

Marr started his career with The Smiths, beginning an amazing history as one of the most influential songwriters and guitarists in British independent music. His subsequent creative journey has seen him at the heart of The The, Electronic, Modest Mouse and The Cribs, as well as working with such names as The Pretenders, Talking Heads, The Avalanches and Blondie. He co-wrote and featured on Pollinator’s ‘My Monster’ in 2017, the latest collaboration between the old friends. 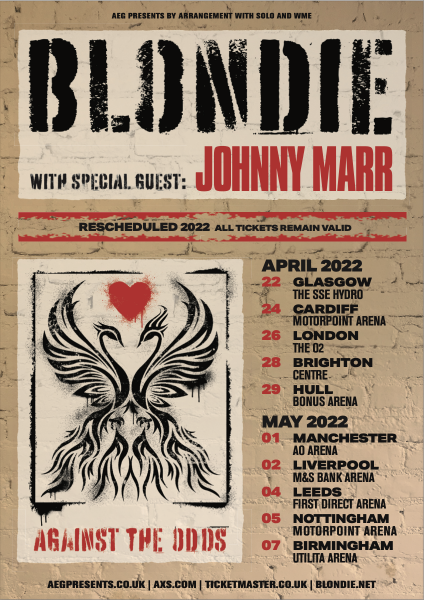 Most recently, Marr worked with iconic musician and composer Hans Zimmer – with whom he recorded the soundtrack for the new James Bond film No Time To Die, including the title track created with Billie Eilish. Marr’s solo career has given rise to three UK Top Ten albums – The Messenger (2013), Playland (2014) and 2018’s Call The Comet, with a new double album titled ‘Fever Dreams Pts 1 – 4’ soon to be announced.

The Blondie live show is still an experience in itself, with the classic hits like ‘Heart Of Glass’, ‘Atomic’, ‘Tide Is High’, ‘Maria’, ‘Sunday Girl’, ‘Rapture’ and ‘Call Me’ naturally blending with their last studio album Pollinator – offering a treasure trove of newly adored songs including singles ‘Too Much’, ‘Long Time’ and ‘Fun.’

Pollinator, released in 2017, soared to Number 4 on the UK charts, making it the group’s first Top 5 entry in over 18 years, with The Guardian calling it “Blondie’s classic late-1970s band sound, albeit with a modern sheen.”  Their last UK tour, supporting the album, was a roaring success. The Independent called their London show “One glorious, eternal party with a band who feel like family.”

The band hasn’t stopped to catch their breath since then, working on both Blondie-centric projects and their successful independent ventures. Debbie’s bestselling autobiography, ‘FACE IT,’ was released in October 2019 to overwhelming praise. Crowned “the ultimate rock n roll memoir,” by The Sunday Times, the book went on to be a New York Times best seller. The ‘FACE IT’ paperback edition is set for release in Autumn 2021 by Harper Collins UK and will feature an updated format and newly added epilogue. Next Spring, Debbie Harry’s debut solo album KooKoo (1981) will be released as a Deluxe Edition Reissue. Visit www.blondie.net”

In 2019, Chris released a highly acclaimed photography book, ‘POINT OF VIEW.’ Called “stunning” by Rolling Stone, and “fascinating” by the New York Times, the book chronicles New York City’s 1970s punk heyday, an incredible time in music history. Plus, Clem released his documentary ‘My View: Clem Burke’ in 2019, followed by the release of his second album with The Empty Hearts in August last year. The new LP, appropriately titled The Second Album, is their first release in six years.

The band also took their first ever trip to Cuba in 2019, bringing Blondie live to Havana, creating a fresh new sound with the accompaniment of Cuban side musicians for the sold-out shows. Released earlier this year via BMG Records, “BLONDIE: VIVIR EN LA HABANA” is a short film and soundtrack project culled from the band’s live performances during the week-long cultural exchange with Cuba.

In time for the festive season, Blondie are opening the vaults for Christmas with a new limited edition 12-inch EP ‘Yuletide Throwdown’, available digitally on 8th October and on vinyl 5th November. The EP features the ultra-rare 80’s Christmas-inspired track ‘Yuletide Throwdown,’ co-written and performed with Fab 5 Freddy, along with a new, exclusive remix of the song by Cut Chemist.

Further, the first authorized Blondie Archive project in the band’s history — “BLONDIE 1974-1982: Against The Odds” — will be released in four formats and include extensive liner notes, “track by track” commentary by the entire band, complete discography, photographic history plus rare, unreleased bonus material. Not content to rest on past laurels though, the band is presently working with producer John Congleton on their 12th album.

‘FACE IT’ by Debbie Harry is currently available in hardback edition and as an eBook, visit www.harpercollins.co.uk

‘Yuletide Throwdown’ will be available digitally on 8th October, and on limited edition vinyl on 5th November. Visit https://blondie.lnk.to/YuletideThrowdownSR