Blasphemy’s Gods of War has terrorised listeners for 25 years gets a respectful reissue to commemorate its silver anniversary. Often overshadowed by its predecessor Fallen Angel of Doom (reviewed here), Blasphemy’s sophomore album is nevertheless equally impressive. Originally released in an era when Norwegian lo-fidelity recordings were de rigueur, Gods of War benefits from a polished production whilst retaining the bands raw aggression.

Even now, a quarter of a century later, Gods of War smoulders like fresh kill and still sounds groundbreaking. This is partly due to the innovative production and partly to the amalgamation of genres. Gods of War incorporates black metal atmospherics, death’s guttural vocals and detuned guitars along with grindcore and even some Teutonic thrash. All of which conspire to provide light and shade but the real key is economy: all the tracks have been refined with all the fat stripped off. Several songs clock in at under a minute and the result is something direct and immediate.

As founders of the ‘War Metal’ genre Blasphemy have created in Gods of War the soundtrack to global apocalypse. Blood soaked in nihilism it’s a 20 minute pounding that rarely lets up. This is evidenced by opener ‘Blasphemous Attack’ which, dispensing with any niceties, simply appears like a thermonuclear warhead hell bent on destruction. ‘Blasphemous Attack’ is one of four songs re-recorded from their demo ‘Blood Upon the Alter’ and it’s surprisingly catchy and brings to mind the black death of Impaled Nazarene.

Prime cuts are the unrelenting ‘Nocturnal Slayer’ and the title track Gods of War which speeds by in 25 blistering seconds. Both ‘Blasphemy’ and ‘Necrosadist’ contain brief ambient introductions which provide a nice foil for the blast beats. Like the calm before the storm they contrast with the heavier passages so when the drums hit, they hit hard. ‘Necrosadist’ in particular contains all the essential ingredients from intricate riffs to powerful drumming and snarling vocals. ‘Empty Chalice’ rounds things off in fine style and ends as abruptly as things began.

Gods of War is the type of album that will benefit from repeat listening as the nature of the production means you’ll be hearing something new on each spin as nuances hidden in the mix reveal themselves. It’s an album that deserves to be listened to in full and while it’s not a concept record the songs are linked thematically and just dipping in and out won’t do Gods of War justice.

American label Nuclear War Now! have reissued this gem with care and restored the track listing and artwork to what the band originally intended. Many have lamented this albums length and some previous reissues have added the 1989 demo Blood Upon the Alter to give the album a more conventional running time. However some records, like Slayer’s Reign In Blood or Discharge’s Hear Nothing…, are partly defined by their succinctness and Gods of War is no exception. The ferocious sonic assault contained herein is perfectly encapsulated in 20 furious minutes. Any more would be overkill. 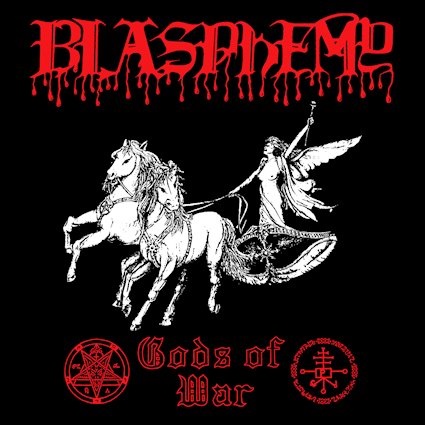