In for the kill…

2008 was the last time we heard anything from Blasphemic Cruelty. Whether or not that’s because Gene Palubicki (ex-Angelcorpse) has been relatively with busy with Perdition Temple (their latest reviewed here) doesn’t really matter because the only thing that lets this down is that there are just four tracks, one of which is a brutal cover of Sodom’s ‘The Crippler’.

The band members are outstanding musicians. Palubicki – a man with an incredible body of work to his name already – must have something wrong with his fingers because they refuse to stay in one place and they don’t move at anything less than ludicrous speed. Not only is bassist Alex Blume an accomplished string basher (he’d have to be to keep up with Palubicki), he’s got a truly gruesome set of death grunts and growls in his armoury. And with Gina Ambrosio at the kit, her skills are staggering, her lines and fills driving and embellishing the in-for-the-kill song-writing.

The three original tracks are replete with manic and melodic lead work and are blasted out at absurdly fast tempos with a half-time feel mid-section dropped in to fortify the pummelling. Peppered with lead breaks as ripping as the riffs splattered across the EP, of the three tracks, it’s difficult to point out a highlight because they’re all well-crafted, well-executed and well heavy! Seven years is a long time for a second release. And as impressive as this is, an album would be better… 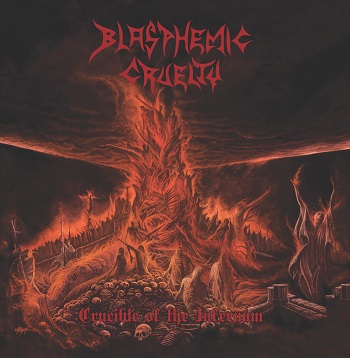