Cornwall blues-rock power trio Blacktop Deluxe are nothing if not prolific: in 2013 (the same year they formed) they released their debut EP Dark Horses; this February they put out Super Sessions Live at Cligga; and here they are with their first full-length, Turn Up, Be Nice, Play Hard. Such keen creativity shows an old-school rock ‘n’ roll doggedness and drive that mirrors the gritty, hot-rod classic rock music that the West Country three-piece churn out – heck, even the cover is a close-up of hot, black tarmac.

If that sounds a bit cliché to you, it doesn’t end there: muscle cars, shotguns and bad women all get mentions, and on top of that the music itself is largely pastiche to heavily blues-influenced rock bands such as ZZ Top, AC/DC and Free. What makes the difference in most places, however, is that Blacktop possess an honest feel for the format and are able to execute it convincingly; the driving beat of opener ‘Mustang 429’ is purpose-built for in-car listens, while ‘Outta The Red’ – their most Free-like track – has all the steady rhythm and gravel-toned vocals necessary for an enjoyable easy-ridin’ anthem. To get listeners dancing, Blacktop conquer that Stonesy strutting rhythm with the ‘honky piano’-accompanied ‘Moving Up A Gear’. Aiding all of this is some superb guitar-playing from frontman Keith Howe, who displays some outstanding axemanship on ‘Mustang 429’, ‘Voodoo Slide’ and ‘Shotgun Callin’ Blues’.

Outside that standard classic rock format, Turn Up is a mixed album. Blacktop Deluxe take on the blues with burly, stompin’ aplomb on ‘Voodoo Slide’, yet blues-by-numbers ‘Colour Me Gone’ and ‘Always Been A Sinner’ try it with far less imagination. The album’s biggest surprises, meanwhile, come from penultimate number ‘Cascade’ – Dire Straits with a Latino spin – and ‘But Not Today’, a disarmingly erudite and arresting ballad about the self-destructive senselessness of addiction.

The truth is, ultimately, your enjoyment of Turn Up, Be Nice, Play Hard will largely be based on your perspective: if you like to hear a new band write new songs to a time-honoured and well-established formula, Blacktop Deluxe have just what you need; if you’d just as soon put together a playlist of ZZ Top, AC/DC and Free, no one could blame you. In any case, Turn Up…’s best tracks, at the very least, are more than worthy of inclusion on such a compilation. 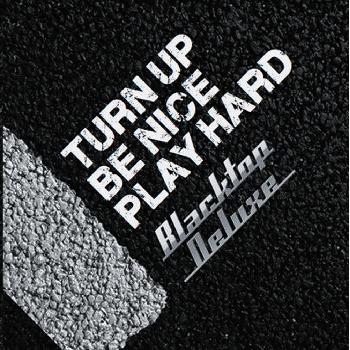