Considering the calibre of musicians involved in Blackthorne an air of mystery and intrigue surrounds the band. Releasing just one album (1993’s Afterlife) and a posthumous collection (Don’t Kill The Thrill) Blackthorne are criminally overlooked in the annuls of metal history. That anomaly will be rectified by this two disc set which compiles both albums along with bonus tracks and unreleased content to make the perfect career overview.

Within the first few bars of opener ‘Cradle To The Grave’ the pedigree that comprised Blackthorne becomes immediately obvious. Reading like a who’s who Afterlife featured vocalist Graham Bonnet (Rainbow), guitarist Bob Kulick (Meat Loaf), bassist extraordinaire Chuck Wright (Quiet Riot), keyboardist Jimmy Waldo (Alcatrazz) and powerhouse drummer Frankie Banali (W.A.S.P.) and they sound justifiably confident. A swirling maelstrom of squealing guitars and pounding drums ‘Cradle To The Grave’ is a bruiser with Bonnet’s voice sounding gruffer than ever and it certainly suits the gritty nature of Afterlife. Originally released when metal was at a commercial ebb and grunge was riding high ‘Cradle To The Grave’ sounds defiantly 80’s and comes replete with cheesy demonic voice and spooky overdubs (which, of course, is a good thing).

Originally issued by Music For Nations Afterlife had no commercial pretensions and instead focused on delivering rock banger after rock banger. Case in point being ‘Breaking The Chains’, an amphetamine charged, rocket-up-the-ass slab of metal that opens the throttle and doesn’t let up for five blistering minutes as Banali’s drums threaten to go off the Richter Scale. Trading speed for power ‘Over And Over’ is a mean mother that arrives with a bad attitude and proceeds to get low down and dirty. Perhaps the epitome of a supergroup Blackthorne bring much more to the project than their musical history. Sure, Kulick’s tone is unmistakable and Waldo’s flourishes are straight outta Alcatrazz yet a strange alchemy occurs which turns Blackthorne into something new. However, the band haven’t turned away from their lineages and a raunchy cover of ‘All Night Long’ closes the album and becomes infinitely heavier with an excitable vocal from Bonnet and gang shouts on the chorus which are simply killer.

Like manna from heaven seven bonus cuts are added and the five demo tracks provide an intriguing insight into the development of Afterlife. For some reason (time constraints?) ‘Wild Inside’ and ‘Get My Heart Out Of Here’ didn’t make the final album but they evidence what a rich seam Blackthorne were mining. An original mix of ‘Afterlife’ features Tony Palacois on guitar and his six string rolls from speaker to speaker like a Panzer tank. Two “Live Unplugged” efforts close the disc and, stripped bare, manage to retain their power and subsequently both ‘Afterlife’ and ‘We Won’t Be Forgotten’ becomes whole new beasts.

First released by Hear No Evil Recordings in 2016 as a two disc set Don’t Kill The Thrill was a veritable treasure trove of tantalising treats. This CD dispenses with the live tracks and interviews that cluttered Don’t Kill The Thrill, adds some unreleased goodies and becomes far more urgent. Things get off to the best possible start with the title track, a riff heavy rocker that’s hard as hell yet swings with inherent groove. If Bonnet fans were surprised by the punishing nature of Afterlife then ‘Don’t Kill The Thrill’ will deliver a 240 volt shock. ‘Wild Inside’ gets polished and bent into shape and its melodic sensibility provides a nice foil for the earthquake inducing ‘Skeletons In The Closet’. Writhing and ululating like an electrocuted snake and featuring some stellar work from Kulick ‘Twist The Blade’ has the kind of guitar solo you wish would continue forever.

Don’t Kill The Thrill doesn’t flow quite as well as Afterlife but considering it’s a collection of tracks that’s to be expected. Nevertheless, song for song it easily holds its own with Afterlife and, if anything, it’s a heavier offering and tracks like ‘Man In A Black Hat’ and ‘Judgement Day’ drip with attitude. Packing a punch and fleet of foot ‘Insanity’ lands a succession of blows and it would be interesting to hear how this track developed as it has the potential to become a rock staple. ‘Sanctuary’ has the same grandiose vision as Dio’s ‘The Last In Line’ and inhabits the same kind of sonic space and drags itself along like a wounded man over hot sands. With the wind in their sales ‘Save Me’ races along at a furious rate of knots and makes an apt conclusion to the original “album”.

Bolstered by eight demos these tracks are for those who like a rough edge on their metal and whilst they’re not always top quality soundwise they’ve a fire and energy that can’t be faked and it’s great to hear tracks like ‘Twist The Blade’ in embryo form and with Bonnet ad libbing his vocals. Sounding more Kiss than Kiss ‘Love From The Ashes’ is a fitting finale and brings down the curtain in style. I can’t help thinking that Blackthorne were a band out of time. If Afterlife was released five years earlier I’m sure it would have done better business and Don’t Kill The Thrill shows they had enough in their arsenal to sustain a long and successful career. 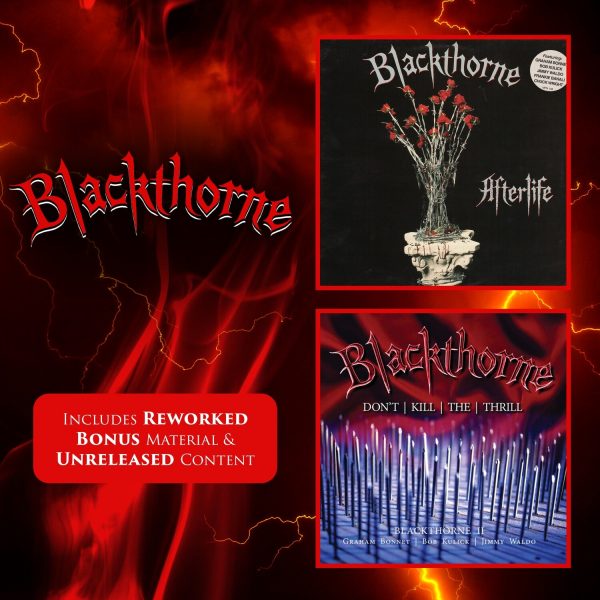