Hell yeah, Black Stone Cherry are back y’all. Here we are, 19 years in and studio album no. 7, ‘The Human Condition’, has landed. The announcement of the album, with it’s simple cover design and thoughtful title, provoked some conversation – is this going to be BSC’s gentle, mature, thoughtful album?

Well, yes and no is the answer. The first three tracks steamroller over you, chock full, as they are, with huge riffs, scorching solos and punishing drums. Indeed, ‘Push Down And Turn’ may well be one of the heaviest things they’ve recorded. It has a vaguely 90’s vibe but with uber 2020 production – it’s central riff is angular, almost hardcore, pummelled forwards by mechanical rhythm guitar and triphammer drums. “The whole world’s been shakin'” roars Chris Robertson early on in the proceedings, while the bands combined sound does exactly that.

You also quickly realise that the album title is a theme, this album is utterly of the now. The first words that ring out of the speakers: “People, people, your attention please, I need to tell y’all about a new disease” – attest to that. It is indeed an album about the state of humankind today, in all it’s varied colours. The album was completed mere days before the world went into lockdown and that fear, paranoia and urgency can be heard in the steel-plated barrage of the album. It was recorded, in a change of style for the band, intricately, meticulously – the band recording their pieces separately and multi-tracking obsessively…no ‘live in the studio’ blow out’s this time. And the slick resulting sound is, frankly, enormous. Every second of this album is filled with sound and thunder.

But, amidst the heavy, BSC have not lost sight of a damn good melody. You only have to look at a couple of the song titles to know they’re going to be potted rock mini-epics. ”When Angels Learn To Fly’ (see, what did I tell ya!) is a polished commercial melodic ballad á la Aerosmith or Whitesnake, it instantly lodges in your head, while not abandoning those seismic guitars. ‘If My Heart Had Wings’ (again, none more ballad!) has it all – piano, strings, acoustic geetaws – and ticks all of the ‘totes emosh’ boxes. Lighters will be held aloft as Robinson sings of “angels without halos” and being “lost without you”. No, you’ve got something in your eye!

But what this album mostly does is rock. Hard. There is a directness, an energy, a purity of vision to all of this. It never sits still, riffs morph and get kicked into touch by other, bigger riffs, the production giving it all a hyper real sheen. It bulldozes it’s way forwards with a zeitgeist-style sense of anger and fear – “life is way too short to live this way”.

‘The Chain’ (not a Fleetwood Mac cover) is a riff heavy beast of a thing with quite exhausting energy levels (which carry on for the entire album, it all has a wired intensity) and some tasty millennial Hendrix sustain to finish while the brute momentum of ‘Ride’ has a ‘very metal’ NWOBHM feel. And then a left-field ELO cover appears from nowhere! ‘Don’t Let Me Down’ has massed maximum-fuzz guitars and a mighty groove. It’s ELO, therefore it’s already a great song but this modern makeover is somewhat killer.

And on it goes, riff after riff, the energy levels never dropping. We finish with ‘Keep On Keeping On’ – which is sure to become a future BSC anthem. It’s classic American rock, instantly bringing a smile to your face, a genuine top-down driving song that brings it’s own sunshine. This level of class is second nature to Black Stone Cherry now.

So there we are. Black Stone Cherry rarely put a foot wrong but ‘The Human Condition’ may well be one of their best yet. The performances are stunning, soulful yet heavy, the songs are uniformly great and the production is state of the art, it’ll be great to hear these tracks played live with the studio sheen shaken off. It’s a great modern hard rock album is what this is, heavy as a very heavy thing yet with a sharp eye kept on the radio, and how welcome is that right now! 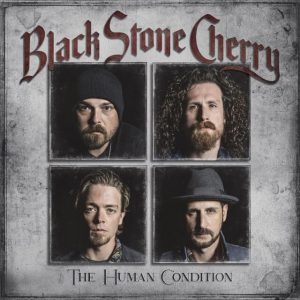