BSC have the ability to really rock a crowd but then change the atmosphere and tone it down to an emotional level and captivate an audience.

It’s always a great day when you hear a band you love are on tour and are visiting your country. This would’ve been the feeling for Black Stone Cherry (BSC) fans all over Birmingham the night of this filming. Pulling out all the stops, Black Stone Cherry played to what looked like a full house delivering a captivating performance of all their hit songs from albums all the way back to 2006. From the get go fans were engaged, singing along to all the tracks, you could see the excitement on this band’s faces, what a feeling that must be to hear a crowd recite your lyrics back to you.

Chris Robertson was on top form delivering a raspy, high range vocal as epic as ever. Black Stone Cherry are certainly a fantastic live band and having personally seen this tour live in Sheffield, I can vouch for a great gig with brilliant sound and an outstanding light show. A focal point for me would be the crowd participation conveying a perfectly timed ‘HEY, HEY’ whilst Chris delivers his guitar solo effortlessly.

Throughout the DVD there is so much energy both on stage and off stage in the stalls and standing pit, I’d say that suggests a BSC concert is guaranteed to keep you entertained. The sheer volume and stage presence circulates around the entire arena. Raw musicianship and a connection with fans makes you feel like you’re a part of something and this Live DVD captures all of that effortlessly, you feel as if you’re there with them. As the cameras zoom around the room, you can see that there isn’t a single person stood still, everyone is moving some part of their body whether it be waving their arms around, head banging or jumping up and down – It’s great to watch. You can see the band feeding off the audience’s cheers, screams and vocal contributions, this seems to have been one hell of a show. 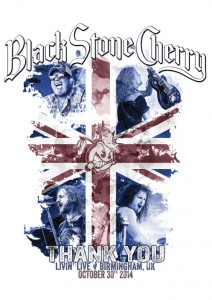 Half an hour into the DVD and the stage has a midnight blue mood lighting set whilst the band build up to their classic track ‘Such A Shame’. From mood lighting to flashing lights there isn’t a dull moment throughout and there’s always something to feast your eyes on.

I would suggest that this live DVD has captured Black Stone Cherry at their best delivering the finest performance I have seen to date. The turnout for these guys was phenomenal to say that not too many years ago they were just a band from Kentucky, America playing to a bare minimum of 200 people here in the UK and now to quote Ben Wells ‘We’re playing to 8,000 loyal fans and followers here in Birmingham’. BSC are what is known as true rock artists, they are in it for the enjoyment of Rock N Roll and you can really tell.

Following ‘Such A Shame’ the Arena falls into silence, just cell phones at the ready creating a sea of beautiful bright white lights. The crowd take their cue from Chris and we hear the first verse and chorus to ‘The Things My Father Said’ without the need of vocals from stage. This was a highlight of the DVD for me as you can see the emotion on everyone’s face and the delivery was just perfect. Removing his cap and staring out into the crowd Chris just looks in awe, this alongside Ben Wells standing high and proud on the stage podium whilst closing the song with his heartfelt guitar outro makes for my personal favourite part and gave me goosebumps.

Live, BSC have the ability to really rock a crowd but then change the atmosphere and tone it down to an emotional level and captivate an audience. An hour into the show and drummer John Fred Young takes to his kit for an epic drum solo. Technical as ever and pounding the cymbals, kick drum and snare, the solo is gripping.

This is a fantastic quality DVD, filming the show from all angles and even from behind the best seat in the house, the drum kit. You get to discover what a BSC concert feels like from both the band and fans point of view. Rock N’ Roll is still alive and well and this DVD is most definitely worth the watch.