Blasted forth on 3 February 2017 by Nuclear Blast and reviewed by Gary “got any Irish in ya?” Cordwell

So, who’d have thunk it, album number three from Black Star Riders and dayum, but it’s a classy affair! But then from the name on down, BSR have always been a quality proposition. There has never been any resting on laurels. No trading purely on a much loved musical legacy or back catalogue of incredible songs. Scott Gorham knew that to retain any integrity or dignity they had to start afresh, bringing what was great about Lizzy into a rocking, thoroughly contemporary band. It’s a ballsy move, how much easier would it have been to shuffle on as Thin Lizzy and play ‘Jailbreak’ every night? But no, that’s not fulfilling enough for Gorham and co., they have new songs to write, fresh fields to conquer, and the choice of Ricky Warwick as frontman was the masterstroke.

Warwick, already held in a great deal of affection from his Almighty days, a Northern Irish, spit ‘n sawdust wordsmith who knew better than to try to fill lynott’s legendary shoes, he just does what he does. No Pop Idol winners for the BSR’s! And the opening salvo of the title track leaves you in no doubt – a beautifully polished, sleek, classy, chrome plated riff blasts forth. The harmony twin lead guitars are to die for. This is energised, Premier League rock. And then midway through the song comes another equally cool and gritty riff with added slide and air raid sirens…two blinders for the price of one.

And there’s no time to catch your breath ‘cos this beast just keeps barrelling forward. The band are now joined by backing singers and they weave perfectly with Warwicks road hog growl. Lynotts spirit is effortlessly evoked in several songs, particularly ‘Dancing With The Wrong Girl’ which has a bit of a ‘Boys Are Back In town’ vibe, the pitch-perfect musicianship and classic Gorham solo make this song a joy from beginning to end.

‘Who Rides The Tiger’ is a hard charging cowboy song. They really sound like a band with something to prove – which is extraordinary for a bunch with this much experience and this untouchable a legacy. The rock out’s on here (which, really, is most of the album) are simply scorching. ‘Thinking About You Could Get Me Killed’ has bulldozer momentum…albeit a bulldozer with a shiny V8 engine. Even ‘Cold War Love’, which is probably the closest we have to a ballad here, is all tough guy heartache, powerchords and emotive solos.

‘True Blue Kid’ is wah-wah laced, heavy and funky, lyrically reminiscent of Warwicks brilliant recent solo album while ‘Ticket To Rise’ is a stand out on an already stellar disc, the backing singers are back, Warwick and Gorham soaring above the thunderous foundation and leading us into a gospel finish. And perhaps a ballad to finish? Bollocks to that, the band rock to the finish line with a perfect blend of Lizzys lyricism and the Almighty’s assault.

And there we are. Powerful, classy and effortlessly brilliant. Some bands just have “it” and BSR here prove that they have “it” in spades! No mere copyists, here are a world class band in their own right who also never let you forget where they came from. Bucking the trend and defying the odds, Black Star Riders just keep getting better. Has the album of the year already landed? Very possibly. 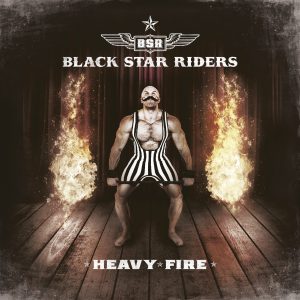