Masters of anthemic rock ‘n’ roll Black Star Riders are proud to announce that their New Album, entitled “Wrong Side Of Paradise” will be released by Earache records Worldwide on Friday January 20th 2023.

The Album, featuring 11 tracks, was recorded in the Autumn of 2021 at Studio 606 in Northridge California and Toochtoon Sound in Redmond Oregon with producer and longtime BSR associate, Jay Ruston.

The video features a lightning-hot performance from the four-time UK Top 25 band, and teases the watcher into suspecting a standard rock video cliché before flipping it on its head with the entrance of the rough’n’tough Roller Derby Dolls.

Ricky Warwick: ““Better Than Saturday Night” is a feel-good, uplifting tune about staying strong in the face of adversity, being true to yourself, and the power of positivity. I wrote it for my kids, but subliminally I think I also wrote it for myself and everyone for those days when we need to find a little bit of extra strength.”

He continues: “We wanted to reflect the positivity, power, attitude and strength to endure sentiment in the lyrics of the song. And no better way to do that than Black Star Riders rockin’ out with the Los Angeles Roller Derby Dolls.”

About the album Ricky adds “I am very proud of this record, Black Star Riders fifth release and the first with our new and exciting relationship with Earache Records. As with all BSR albums, ‘Wrong Side Of Paradise’ is an anthemic statement of intent,  driven by ferocious guitars and thundering drums. I can only write about my own personal experiences, my families, my friends and how I see a world that is unraveling and changing faster than we can comprehend. That being said, I’m a firm believer in the power of positivity, something that echoes throughout this album” 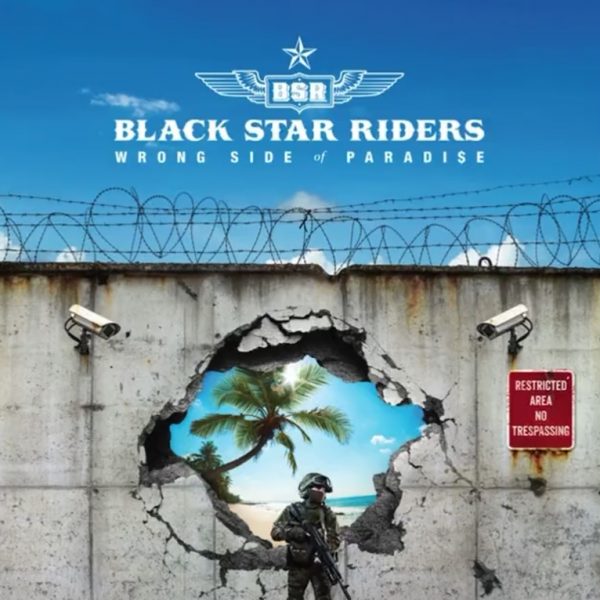 In addition to the new record the band have some special plans to celebrate their 10th Anniversary next year
Ricky Warwick: “Can you believe 2023 is 10 years of Black Star Riders … How time flies while you are having fun!  We decided to do something special to commemorate this occasion. For the UK tour only, to co-incide with the album’s release, we will be bringing back the legendary Scott Gorham (guitar) and Jimmy DeGrasso (drums) for the dates to make them extra special!”

“As we all know the Worldwide pandemic has changed so many things in all our lives and when we brought Christian Martucci into the fold in 2018 we had planned to work the BSR cycle in rotation with Christian’s Corey Taylor / Stone Sour gig so he could do both. The two year break in live music has unfortunately put paid to this plan and Christian has had to leave Black Star Riders to concentrate on his work with Corey.  We wish him all the best and he will forever remain part of the BSR family”

Tour dates are below:

Tickets are available on general sale 10am on Thursday June 9th.

‘Wrong Side Of Paradise’ is available for pre-order worldwide at earache.com/blackstarriders on limited coloured vinyl (including green, blue, red and black/white split), black vinyl, signed CD, cassette and digital download. A special edition of the album containing two bonus tracks can be found on CD (which comes with a 24-page song booklet) and USB stick formats. Various collector bundles are also available, including one with an exclusive 12”.

A special album pre-order / tour ticket link will be available from 9am on Monday June 6th.