The latest Black Sabbath album to get the deluxe box set treatment is 1976’s Technical Ecstasy, reissued in 4 x CD and 5 x LP formats which both contain identical contents. They offer a newly remastered version of the original album mix, along with a brand new Steven Wilson stereo mix. SW’s remix doesn’t include the Bill Ward penned-and-sung ‘It’s Alright’, which is included in its original single mono mix. The third disc in the box offers unheard outtakes and alternate mixes (also remixed by Wilson) while the obligatory live album provides 10 previously unreleased tracks from concert recordings from the 1976-77 world tour. Aside from the music, the set includes a booklet with rare photos, artwork, and liner notes, along with a poster and replica tour book from the Technical Ecstasy tour. 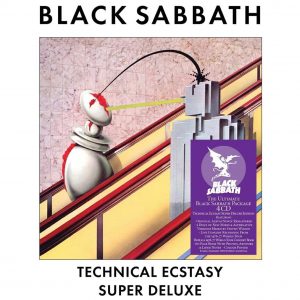 At the time the album was recorded in Miami there was much disruption in the Sabbath camp with Tony Iommi thrust into the reluctant role of producer. Sabbath had began experimenting with keyboards and by now they were even more of an influence with Jezz Woodroffe, who would later go on to be an integral part of Robert Plant’s early solo career, working closely with Iommi on the song arrangements. The original album is given an new remaster but the Steven Wilson mix really enhances the sound with the likes of ‘Rock n Roll Doctor’ and ‘All Moving Parts (Stand Still)’ really standing out. Bill’s wonderful ‘It’s Alright’ could have done for Sabbath what ‘Beth’ did for KISS but for some reason never got the airplay it deserved. 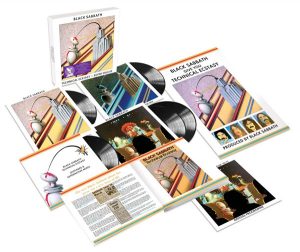 The box set offers a terrific opportunity to rediscover these songs as only ‘Dirty Women’ would enjoy any longevity in the Sabbath setlist, being performed by the Ozzy led line-up right up to and including those magical final shows in Birmingham. So across the live album here there are versions of ‘Gypsy’ and ‘All Moving Parts (Stand Still)’ along with the obligatory older numbers including ‘Children of the Grave’, ‘War Pigs’ and ‘Symptom of the Universe’ (albeit ‘Paranoid’ is a notable omission). Unlike many of their contemporaries Sabbath never released a defining live album during the 70’s and this offers a good representation of what the band sounded like towards the end of their classic era. The sound quality is well above average and Ozzy sounds in decent shape.

After the horrible Sabotage cover, Hipgnosis were commissioned for Technical Ecstasy and the end result was the striking image of “love at first sight” according to Storm Thorgerson or “two robots fucking on an escalator” as Ozzy so delicately put it. But whichever way you look at it, the artwork made for a great cover and is heavily featured throughout the box set and, just like the music itself, represented a departure for Sabbath on what had gone before as they explored new ideas.

Overall then this is a hugely enjoyable box set. The alternate versions are by no mean essential but the new mixes of the original album sound great and the live album is well worth checking out. The hardback booklet is full of detailed information that captures where Sabbath were at during that point in their career and the whole package has been extremely well put together, offering new insight into an often overlooked chapter in the Sabbath story. Released via BMG on October 1st.