Four merry bleeders from the depths of the underworld have delivered unto Midlands Rocks their wares, all of them suffering in some way. Sweden’s Astrophobos are tormented by Remnants of Forgotten Horrors, Czech’s Panychida are inconsolable as they endure Grief For An Idol, Spain’s Wrong are wallowing in Memories of Sorrow, and Ukraine’s Moloch, that poor tormented soul, is screaming bloody murder at the hands of Verwüstung (“devastation”). Poor devils. Come, let us join hands and be as one in their misery and woe. It’ll be fun, I betcha…

Click the band names to go directly to the review.

With their first EP, Arcane Secrets, appearing in 2010, here we are four years later with their first full length, Remnants of Forgotten Horrors. Okay, so that’s not the greatest of album titles, but for Sweden’s Astrophobos, that’s of no great concern because, as débuts go, this is much better than most. The cleaner-than-usual production does this album and the band many favours. What stands out above all are the band’s combined musicianship, their song-craft, and their ear for melody as well as their capacity for crushing beats and solid structures.

On the one hand, this may be largely pretty much black-metal-by-the-numbers. The structures are fairly predictable, shifting between the melodic and the blasting more often than is probably good for it, the tracks then drop into either a half-tempo or an atmospheric passage in an attempt to counter the repetitive nature of the album. However, Remnants of Forgotten Horrors isn’t trying to be anything other than a black metal album. With Astrophobos, there’s no posturing. They know what they want to say and how to convey it musically and lyrically. This may not be anything new, but it’s delivered with all the conviction of a young band determined to make their mark.

Panychida – Grief For An Idol

Czech’s Panychida have been strolling in the blackened forests since 2004 and have thus far released a couple of demos, two full lengths, and an EP last emerging in 2011. Brimming in all the earthly delights that their Pagan metal can muster, they blend black with folk and the occasional drop of death and their latest album, the mournfully-titled Grief For An Idol sees them continuing along that flora and fauna-filled footpath. Blast beats and fast guitars are adorned with many a melody as well as folk instrumentation (bagpipes on ‘Wayfarer’s Awakening’), a baby crying (‘Don’t Tell Lies To Children’, of course), close-harmony chants (‘Doomsayer’), and well-orchestrated guitar parts. While the songs are well-written, the playing is second-to-none, and the band work well together, it may be a little too calculated in its construction and too precise in its production but this is a solid album. Grief For An Idol warrants much more than a play or two, its diversity and its depths making for a captivating listen.

About a year into their existence – and about a year ago – Spanish duo Wrong dived straight in with their first full length, 2013’s Memories of Sorrow. While Phlegeton and David Pérez both have a wealth of experience behind them, and as with most débuts from such a young band, it has its positives and its negatives. While all five of the tracks, all between six and just over nine minutes long, are well-structured and intricately woven with melody and might, there are times when the album’s mesmeric nature becomes tedious. After two impressive opening tracks, by the time ‘I Prefer So’ arrives, Memories of Sorrow begins to wear a little thin with the seemingly incessant melodies and the guitar tone become irksome. Fortunately, the nine-minute closing track ‘I Want To Hear You Scream’ more than makes up for the album’s flaws.

Though it may not be as balanced as it could be, the musicianship, the song-craft, and the cold and damp atmospherics of the album, particularly those cast by the subtle keyboards and piano, are all enthralling and point the way for a band with much potential.

To say that Ukrainian one-man band Moloch has been busy during its twelve year existence is, to say the least, an understatement. With seven demos, thirty six split releases, fourteen compilations, seven box sets, and eleven full-lengths to his name, it’s pretty safe to say that Pr. Sergiy Fjordsson has got a few things on his mind. Torment, anguish, and suffering bleed through every pore of this bleakly atmospheric album.

Fjordsson wails, screams, and shrieks his way through the scorched and barren landscapes, dragging us deeper and deeper into a sphere beneath what appears to be, on the surface at least, a cold, raw, and primitive black metal album. But Fjordsson is way too intelligent to leave this at the surface level. The full spectrum of sound and texture are utilised not just for effect but for the whole, its substance simultaneously deepening and dissolving with every stroke of the strings, every beat and crash of the drums, and every abysmal shriek. A harrowing experience, Verwüstung has to be endured time and again to appreciate its many depths. Twelve albums in and Moloch’s ability to harness the darkness is showing little sign of abating. 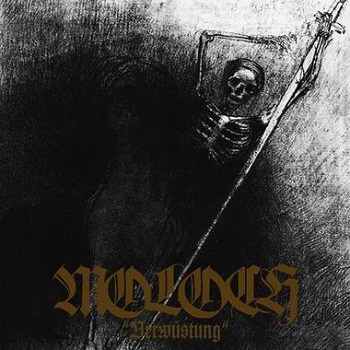