With his cryptic lyrics and distinct musical style there’s always been something very cinematic about Black Francis’ music. From his time with alt-rock pioneers The Pixies, the songs which sprang from his pen had a disconnected, other-worldly feel that made them perfect soundtrack material. What is surprising is that it took him so long to write a film score but when he did it was certainly worth the wait and The Golem, reissued on double heavyweight vinyl is the perfect companion for the German expressionist film The Golem: How He Came Into The World.

Just like creating an actual Golem, Black Francis originally wrote this album in 2008 to be performed at the San Francisco International Film Festival. Produced to accompany Paul Wegener’s 1920 film The Golem: How He Came Into The World Black Francis’ 2010 album is suitably Gothic and the short introduction ‘Miriam And Florian (Version 2)’ succinctly sets the stage and paves the way for the angular and eclectic ‘Makanujo’. Like much that flows from Francis’ pen it’s both discordant and catchy and will be rattling around your cranium long after the discs stopped spinning. Taking a different route, but none the less captivating, ‘Bad News’ is slightly sinister and will surround the listener like dense fog on a dark night.

A little knowledge of Wegener’s expressionist film would help to understand the flow of this album and the dark undercurrent that ebbs beneath. Set in 16th century Prague a rabbi creates a Golem out of clay to protect the Jewish ghetto, but it rebels and destroys the city. Such are the lofty ideas that The Golem is fashioned from, and echoes of Jewish mysticism reverberate throughout this album. ‘The Word’ repeats its lyrics as if a prayer while ‘The Obedient Servant’ explores the master/minion dynamic and mixes up the bitter and sweet with lines such as “Don’t Cry, it’s they who’ll die”. However, this album isn’t anchored in any specific period and ‘The Maharal’ is a sweet piece of contemporary rock that’s liberally drenched in brass and crashing power chords and the result is a song that’ll knock you for six.

You really have to admire Black Francis’ ability to conjure sensations through words and music and ‘Meet Me At The Ghetto Gates’ places an ever decreasing wall around the listener to create a claustrophobic feeling. Paradoxically, the following ‘Custom All The Way’ sounds wide and expansive, almost like a country and western tune, while ‘You’re Gonna Pay’ seethes with revenge and embarks on a musical rampage. A more sedate, world-weary version of ‘The Word’ is used as a reprise as is a parred back rendition of ‘The Maharal’ both of which conspire to bring The Golem to an esoteric conclusion.

While Pete Townshend may have invented the rock opera Black Francis has taken things to a whole new level and Quadrophenia or Tommy never sounded as complete a listen as The Golem. Originally released as a 5CD set this compressed double vinyl version benefits from judicial pruning and comes recommended for long term fans and the curious alike. 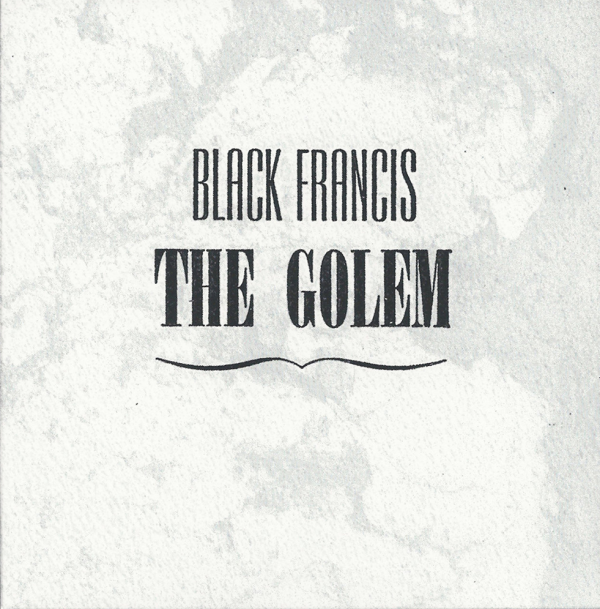