Review and Pics by Russ Tierney Opening tonight is City and Colour, of whom I don’t get to catch much of as I have to watch from the side lines being a photographer n all.  City and Colour is essentially award winning singer-songwriter Dallas Green, who you may know better from  his role in Alexisonfire.  Tonight he goes out with a band behind him which sees him fill the curtained off arena stage, and he proceeds to knock out music as far removed from Alexis as possible. We’re greeted with chilled acoustic numbers that sway between country, blues and folk in places.  After a sold out headline show at the Royal Albert Halls, people have no choice but to stand up and take note as he continues to make a name for himself under the alias of City and Colour.

The lights go down to a ring of “Mon the Biff” chants from the audience as ‘Different People’ kicks in and front man Simon Neil takes to the still curtained off stage to ring out the opening lyrics before the curtain drops and he’s joined by the rest of the band.  A massively impressive set is revealed with the centre piece being a play on their art work of the tree which doubles up to be what I’d interpret as a spine and nervous system, and an accompanying light show.  Not stopping there, there’s two massive screens either side of the tree while the band themselves are flanked by an additional guitarist and pianist on some numbers. 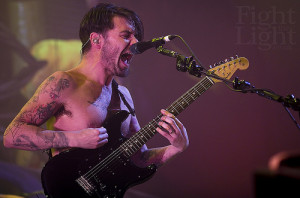 Full of energy, Biffy kick out exactly what the fans expect of them.  Ironically, for those not so familiar, just as you get comfortable they take you on a journey and then pull something out of left field to ensure you’re not at any old verse chorus verse rock show.  Alt indie is combined with mainstream singer/songwriter rock hooks that are strongly punctuated by some clever musical intricacies, aggressive screams and loud guitars.

“We played Newcastle last night”, boo’s fill the arena, “it was awesome, but I think tonight has got to be better” (cheers) – it may be your standard on stage jargon, but the crowd are soon rewarded with the highlight for me, “Living Is A Problem (Because Everything Dies)”.

This is the first time Simon and bassist James Johnston get to man in unison the two walk ways protruding out in to the audience and towards the side tiers that gives us (by now me), an up close and personal view for a change.  The tight smoke cannon accented stabs make way for some killer backing vocals that bring in the verse in what has to be one of the most dynamically rich and heavier numbers in the set, and the crowd respond in kind.

By now Biffy have the crowd where they want them, and during “Bubbles”, they’re only too willing to fulfil the request of making the “floor bounce”, leaving those in the tiers gutted they didn’t manage to buy a standing ticket – but they do try and join in all the same.

A couple more pass before their 15th number and unavoidably familiar “God & Satan” is given the acoustic treatment on the left hand walk way before the band all kick in again before departing so Simon can take on “Machines” acoustically on the right.  We don’t wait long ‘til the epic “Many of Horror” (When We Collide) rears its head or the almost Ozzy influenced intro of “The Captain” kicks us in the teeth, but by the time the 3 song encore of Skylight, Stingin Belle and Mountains gives us our actual ending, the song count is roughly 26 in number! The sound tonight was massively impressive, as is the light show at times, never mind the two dudes getting paid to man some sci-fi styled cock pits hanging from the lighting rig firing spots back at the band.  Maybe there were a few possible layered backing vocals on tape, and of course there’s the samples, but the crowd leave having witnessed a polished show which much like the weather (dry as bone on entry, snowing on the way out), is delightfully unpredictable for the non Biffy connoisseur like myself.

Also while I’m here, a quick shout out to Matt Higgs who gave me his spare ticket (for free so I could review, unfortunately for you depending on how you look at it) and the quality Royal Albert Hall facts.