This album does exactly what it says on the tin, and does it well. It’s Beth Hart, it’s a tribute to Led Zeppelin and, for the most part, it’s a resounding success.

Hart has teamed up for this project with producer Rob Cavallo (Green Day, My Chemical Romance). Cavallo, who also takes on guitar duties (no pressure there) assembled an A-list band and added an orchestra (arranged by David Campbell) in an attempt to recreate that legendary Zeppelin bombast.

There’s no easing into this album, it kicks off with the classic 1-2 of ‘Whole Lotta Love’ and ‘Kashmir’. ‘Whole Lotta Love’ is a curious one – kicking off with that classic riff and a frankly huge sound. Hart is in fine voice, bluesy and raw (although maybe lacking Plant’s youthful libido). It’s when we get to the mid song psychedelic breakdown that things take a turn for the…unusual. Gone for the most part are the lustful moans and groans, replaced with what resembles the soundtrack to ‘The Shining’. Eerie strings and horror movie ambience are the name of the game here – spooky replacing pervy. Before we know it, however, we’re back to the rock and a faithful recreation of the solo before some ‘Psycho’ style strings take us to the finishing line.

We’re on safer ground with ‘Kashmir’, a song perfectly suited to the orchestral treatment. Hart’s voice is perfect for this. The key of the strings is tweaked slightly but that bottomless heaviosity and grandeur are there in spades. Hart wails her, erm, heart out while the song builds steadily and epically. The drums, already huge, manage to get heavier still, pushing at the edge of break up – kudos to drummer Dorian Crozier for filling the biggest shoes in rock drumming.

We then head into the bane of every guitar shop…’Stairway’. It’s a faithful reading, melodic and controlled. Strings are deployed subtly while Hart’s voice is high in the mix, gentle yet in your face (in your ear), she’s incredibly effective, perhaps even more so in these quiet moments. While not quite as stunning as Heart’s incredible version, it’s close, and that’s no mean feat.

Several of the songs are straight ahead renditions, step forward ‘Black Dog’ and ‘Good Times Bad Times’ and there are also a couple of interesting Medley’s. ‘Dancing Days’ segues into ‘When The Levee Breaks’. Now this is a big ask of any band – goodness knows what magic Page weaved when he recorded and produced this track but magic it most certainly was. Undoubtedly one of Zeppelin’s finest moments, it’s a hard one to match but Hart nails the bluesiness of the vocals.

Stand outs? Hell, it’s all good but, surprisingly, ‘The Crunge’. Not often regarded as one of Zep’s finest moments but this really works. Hart’s voice is tailor made for gutbucket soul and that’s what she brings here. Robert Plant is many, many things but not particularly a soul singer, the door is wide open for Hart to sneak in and steal this song and that’s exactly what she does. The riff is funked up, horns are utilised and the track takes on a dirty James Brown vibe, the band collectively nail this.

We end with ‘The Rain Song’. Again, Hart gets to do some quiet emoting which, again, works incredibly well. It’s beautifully done, easing into a powerful, dramatic finale. It’s no easy thing covering Led Zeppelin. I mean, why tweak perfection? But Hart and co. manage it. It’s what it says, a tribute, not a rip off. It feels totally heartfelt, it’s a thank you, undertaken with joy and respect. It also reminds you, if you needed reminding, quite how special Zeppelin were and how many grade A musicians (and orchestras) it takes to even approach something of the sound those 4 men made. Will we ever see their like again?

This is simply a great album performed with heart (or Hart), soul and balls…and special mention must be made again of Crozier, he’s a beast. Recommended.

Released on 25 February 2022 by Provogue Records 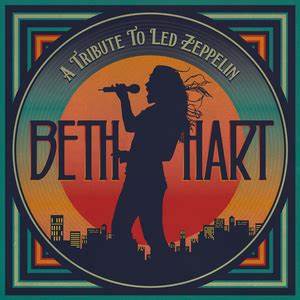