If you’ve watched the above video and enjoyed it, then this album is for you. Because that’s exactly what this is, just Ben Harper, his Monteleone lap steel guitar, and a beautiful, wordless, one man mini symphony.

Blues/folk/gospel/rock jack-of-all-trades Harper has been around for some time now. His brilliant debut album appeared back in 1993 and since then there have been many more equally brilliant albums, spanning multiple genres. He has his own band (The Innocent Criminals) and has also recorded albums with The Blind Boys Of Alabama and blues harp supremo Charlie Musselwhite, oh yeah, and racked up 3 Grammy’s.

‘Winter Is For Lovers’, however, feels like a summation, a look back, an examination of how far he’s come and where he’s planning to go. His blues and folk pedigree is undeniably authentic. His family owned The Folk Music Centre on the edge of the California desert which was frequented by, amongst others, Sonny Terry, Brownie McGhee and John Fahey (whose ‘American Primitive’ style of playing is a key reference point for this album). While working in the store, young Harper got to meet, jam with, and learn at the feet of such luminaries as Ry Cooder, Leonard Cohen, Jackson Browne and Taj Mahal. Mahal going as far as to take Harper under his wing and mentor him.

So yeah, the lap steel began to exert a hypnotic hold over Harper and so it was the lap steel he turned to to record this album. And just the lap steel, that’s it, that’s all you hear here but, when it’s played this well, with this much expression, who needs anything more. It’s Harpers paintbrush, his tool, used with dexterous abandon (and precision) to paint these impressionist portraits.

The album is composed of short pieces that are meant to join as an entire work. each piece is named after an area or city that Harper has a personal connection to. A collection of snapshots that create a bigger picture, a collage of sound, of experience (stop me before I get too pretentious…too late), an aural jaunt around the world, from the most personal to the most cosmopolitan and universal.

The tracks create images in your mind, hold a mirror up to your own experiences and preconceptions. David Foster Wallace’s mind-boggling novel ‘Infinite Jest’ was also an inspiration to Harper, a series of short stories fused into a single narrative.

So, does it work? Yes is the short answer. And keep this short we will, it’s for you to listen to this, to create your own images and moods. From the haunting Eastern lilt of ‘Istanbul’ to the quirky bustle of ‘New York’, the cinemascope vistas of ‘Joshua Tree’ (very Ry Cooder) to the angular jazz of ‘Harlem’, it’s genuinely gorgeous stuff. In many pieces (‘Toronto’ comes to mind) the spaces between the notes carry equal import. Silence, and time to reflect, is golden.

This is 31 minutes of music that you need to hear, and give your time and attention to. Although it works very nicely indeed as background music, it deserves more from you. Sit back, relax, and globetrot with Ben. Darkness never intrudes upon this music, the world as presented here is a good place. Open, sophisticated, inclusive and positive. The final note floats away and all is well. ‘Winter Is For Lovers’ is up there with ‘Paris, Texas’ as a suite of acoustic instrumental music…which is a shorthand way of saying that this is as good as it gets.

Released in October by  Anti-Records 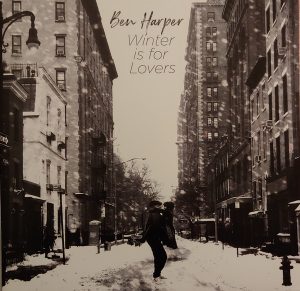