After 2021’s most successful event to date and in celebration of Halloween, BLOODSTOCK is excited to announce a swath of bands for 2022’s Catton Park heavy metal party, including their final main stage headliner!

The mighty BEHEMOTH will bring their spectacular production to close out the Ronnie James Dio main stage on Friday. Nergal tells us: “Bloodstock has a very special place in Behemoth’s heart. They are one of the first major European metal festivals who took risks to position Behemoth as a festival headliner; a game changer for us in the UK! I can’t wait to get back onto the legendary grounds of Catton Park and raise some monumental hell with our legions! Until August!”

The Polish heretics spent lockdown writing new music and putting on the best livestream we’ve ever seen, so we’re excited to see what they have in store for us next summer. In the meantime, remind yourself of their incredible production with this live clip of ‘Evoe’, taken from their In Absentia Dei stream, which sees a live release on 17 December via Nuclear Blast.

Las Vegas ‘death western’ crew, SPIRITWORLD earn a Saturday main stage slot in a UK festival exclusive! The band drop their debut Pagan Rhythms album via Century Media on 5 November and we urge you to check it out! Get a taste of their ‘death western’ sound and aesthetic via the awesome video for ‘The Bringer Of Light’, taken from that debut.

We also welcome Sweden’s black metal kings, DARK FUNERAL to Sunday’s main stage in yet another UK festival exclusive. It’s been five long years since their last album, but the icons recently confirmed they have finished recording their latest, seventh opus with producer Daniel Bergstrand, with a prospective release date of March 2022. While we wait, check out a video from their archives, 1996’s ‘The Secrets Of The Black Arts’.

Moving over to the Sophie Lancaster stage, Austrian diabolics, BELPHEGOR grab a slot on the bill. With a new album arriving in 2022, we can look forward to seeing some new tracks live. Frontman Helmuth comments, “Hail! We are proud to announce that we are again invited to the ingenious Bloodstock Open Air in Derbyshire, England in August 2022 and we will shred the Sophie Lancaster stage. Be prepared!” In the meantime, watch their devilish video for 2017’s ‘Baphomet’.

Grabbing a Sophie stage spot on Friday are British metal squad, HEART OF A COWARD. The band are working hard on album #5, so we hope to see new music in ‘22. Swelling Saturday’s Sophie roster are Celtic folk punks, FEROCIOUS DOG, currently half-way through an extensive UK headline tour to promote their latest record The Hope released just two weeks ago. The six-piece shared an emotional official video for the title track on World Mental Health Day, made in collaboration with NHS advisors.

Also added to the Sophie stage on Saturday are Harrogate’s BLOOD YOUTH, who released their acclaimed third album at the start of October, titled Visions Of Another Hell. Watch the video for latest single ‘Colony3’.

In addition, joining Saturday’s Sophie line-up are much lauded Hull crew, BLACK TONGUE bringing their fresh take on down tempo deathcore & doom. The group just wrapped up their first UK headline tour in 2 years and are now prepping to perform at Cvltfest in November before heading out on the road with Decapitated in 2022 for the latter’s 25th anniversary – not a bad warm-up for Bloodstock!

Last but not least, up-and-coming British noiseniks, HERIOT land a slot on Sunday’s Sophie stage. With US magazine Revolver recently declaring them “one of the most promising young bands in modern metalcore”, check out what the fuss is about when they support Svalbard across the UK in November and listen to their recent cover of the Machine Head classic, ‘Ten Ton Hammer’.

With tickets selling faster than ever, all VIP packages, early birds, and campervan tickets are already sold out. Weekend camping tickets & child tickets are on sale now at the ticket store.

BLOODSTOCK will take place at Catton Park, Derbyshire on 11-14 August 2022.

You’ll find all the latest news and information right here. 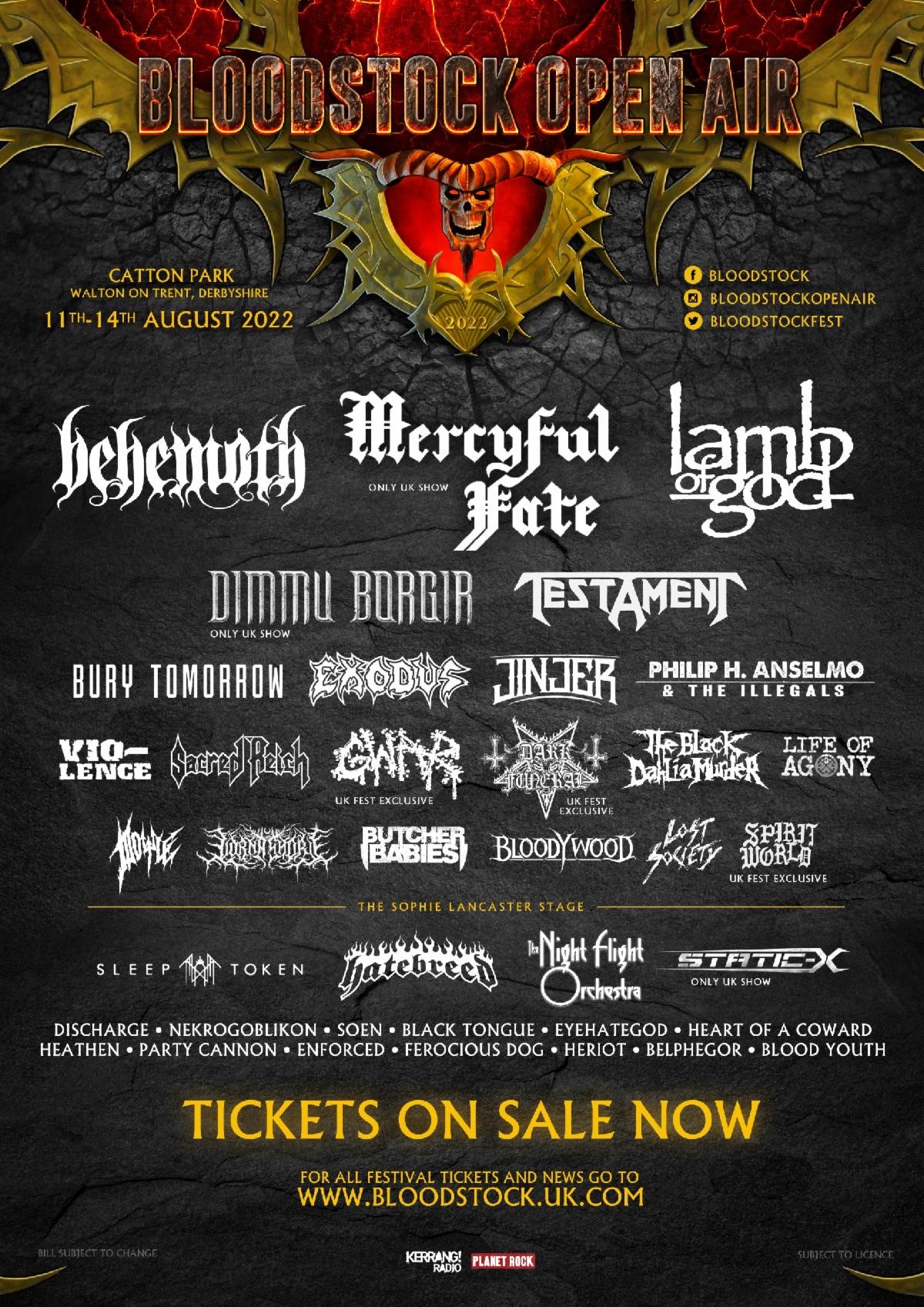