An authenticity and jagged edge that is irresistible…

I’ve reviewed stacks of doom bands for Midlands Rocks and most of them would have nominated early 70s pioneers Pentagram as an influence. Bedemon were a Pentagram offshoot, formed in 1973 by Randy Palmer, Geof O’Keefe, Bobby Liebling, with Mike Matthews making up the quartet. Child of Darkness is a trip back in time, in every sense. It’s the fuzzed up land of the flares and the free n easy, although the doom within is of a different vibe than what generally passes for doom these days. There’s an earthy charm and innocence to the songs that remind us of a time when the world was a very different place.

This album is something of a mish-mash of different Bedemon demos and recording sessions, laid down at different times during the psychedelic 70s. This collection of tracks was first released around a decade ago by Black Widow Records in Italy. With Pentagram very much back in the spotlight today thanks to doom enjoying a wonderful renaissance, Child of Darkness is now undergoing a re-release in the very capable hands of Relapse Records, who have put their own stamp on things in terms of production and professionalism.

There’s also a sense of loss and poignancy wrapped within its soul, as guitarist Randy Palmer is of course no longer walking this earth having cruelly been killed in a car accident in 2002, just a year or so after Bedemon had come back together with a view to working on new projects. Although the heart was ripped out of Bedemon, the Symphony of Shadows album two years ago acted as a tribute to Randy, whilst at the same time bringing the band to the attention of a large audience that had probably previously never really paid them much attention.

It was never the intention for Bedemon to perform live and until now they never have. It’s no surprise to hear therefore that there is such a buzz surrounding their forthcoming inaugural gig in the US, featuring two of the original quartet; Matthews and O’Keefe, although the identity of the other band members remains under wraps for now. The intention is that the setlist will largely be built around Child of Darkness, so what can the lucky punters who roll up in Orange County for the three-day Psycho California festival in May actually expect?

The title track opens things up in traditional fashion, a doomy pounder of a piece, with a tinny drum beating away like a metronome as the guitars gradually get lost in their own smoke filled fug. Liebling opens with the wonderfully sinister intro: ‘Come with me now, Child of Darkness / Come with me into the night, Let me show you this land of enchantment, Let me be your guiding light’. The track has become something of a signature piece for Bedemon and as such is the perfect opener. It’s followed by ‘Enslaver of Humanity’ which is notable for two things. Firstly the anti-Government lyrical content and the inordinate levels of feedback and distortion that whine away like some kind of tortured warthog. This is no frills stuff. But the rough ‘n ready demo decadence of tracks such as ‘Drive Me to the Grave’ and ‘Serpent Venom’ have an authenticity and jagged edge that is irresistible in this hi-tech world of smooth finishes and sleek lines.

Considering the members of the band were still very young when working on these songs the vision and virtuosity within is a joy to savour and behold. Track after track features rumbling riffs, eyeball spinning solos presented with a foggy density and eeriness of the type usually found only high up on the moors. Bobby Liebling’s warbling, whines and wails his way through the whole shebang. The presence of the diminutive doomlord helps make this release a kind of historical footnote, an artifact from a different cosmos which is probably where the habitual heroin user felt he was when these tracks were set down. When Bedemon were working on their material, Black Sabbath were still relative newcomers themselves. But while Ozzy and his chums did leave their mark on Bedemon, the US quartet were no pale imitators and their work has certainly stood the test of time. 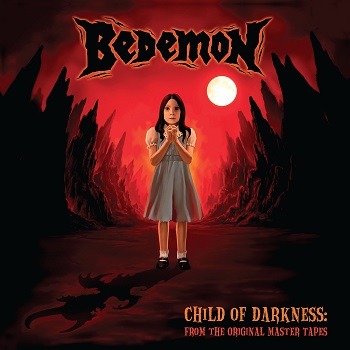