Birthed from the fertile London folk scene Beans on Toast (Jay McAllister) is quite possibly the UK’s hardest working musician. Fiercely independent he’s carved out a unique niche and his second book, Foolhardy Folk Tales, presents some music’s best stories through the pen of a real road warrior.

Like two friends shooting the breeze over a pint or two Foolhardy Folk Tales is told in a conversational manner and it’s a style that immediately adheres Beans to the reader. There’s a rhythmic quality to his writing which means this book is the literary equivalent to a Beans album; each chapter inhabits a unique space yet flows effortlessly and seamlessly. Opening gambit ‘The Great Tesco Robbery’ blurs the lines between fantasy and reality in a tone that recalls Irvine Welsh (back when he was good) and anyone who led a slacker past in a nowhere town will recognise themselves here. It creates a bond that usually only comes through music and it’s to Beans’ credit that he captures something of that magic within these pages.

Beans is a natural born storyteller and many of these tales have been used as in between song banter (albeit in abbreviated form) and ‘The Key’ is a warts-n-all look at life on the road. Presenting the triumph and agony in equal measure it’s a tale of dodgy vans driven by dodgy drivers but there’s also raucous gigs populated by peppy punters. Like most of us Beans started out as a music fan, and he shares some invaluable tips in ‘The Blag’ before inviting you to ‘Get Rich Quick’ (rather like Kramer from Seinfeld).

There’s something very buoyant about Beans’ personality which turns even the most heart wrenching scenario into a positive. Take ‘Beautiful Alice’ for example, which, as with most of these stories, has a strong moral attached. However, what I really like about Beans’ writing is the lack of metaphorical bullshit; like a folky version of American poet Robert Frost, sometimes a poem about chopping wood is about chopping wood. Nevertheless, ‘Messing With Texas’ is dreamlike and takes a flight of fancy but overall there’s a refreshing directness to his prose and, coupled with a left-of-centre sense of humour, makes for an enjoyable romp through Beans’ world.

At just 167 pages Foolhardy Folk Tales is a pretty slim volume meaning it can be consumed in one sitting, but I advise dipping in and out so you can have Beans on Toast every day! 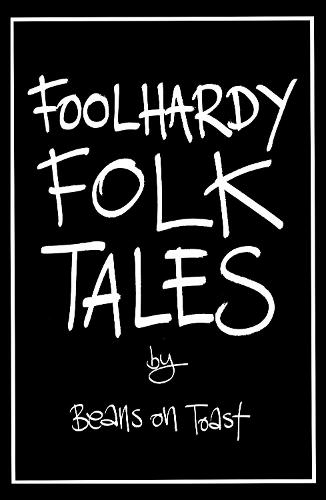