Axe Victim, the first album from Be-Bop Deluxe, has got to be one of history’s most underrated debuts. Similar to the The Velvet Underground & Nico, Be-Bop Deluxe’s first offering has a mythology and influence that far outweighs its record sales. Inspiring many young musicians and sparking the creativity of countless artists Axe Victim’s unique sound still resonates through the years. Remastered and presented in box set loaded with radio sessions, bonus cuts and a lavish booklet it seems Axe Victim, long beloved by music obsessives, is about to get some long overdue mainstream plaudits. 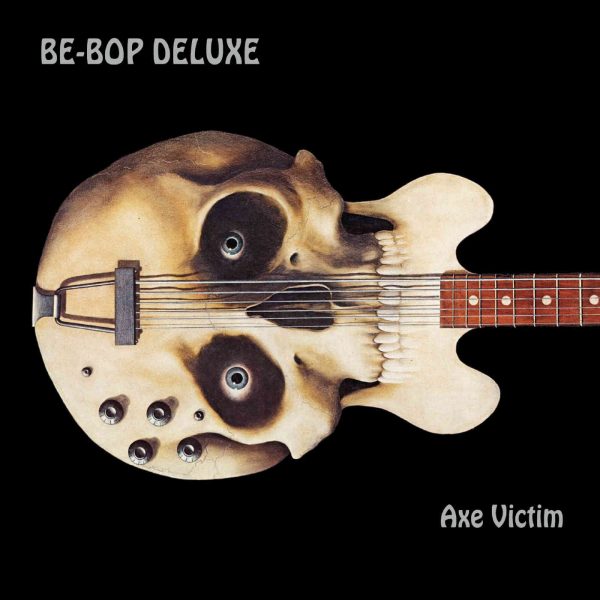 Originally released in 1974 and existing somewhere between Roxy Music and Ziggy Stardust it seemed Axe Victim was birthed two years too late. By ‘74 both glam and art rock had passed their apex and Axe Victimfound Be-Bop Deluxe late to the party with an androgynous sound ill equipped for the coming of machismo rock that would later define the decade. However the benefit of hindsight allows us to examine Axe Victim out of its 1974 context and the album still holds up very well. Disc One presents Axe Victim in its original stereo mix and the first thing to note is how aptly titled it is. A vehicle for band leader Bill Nelson’s guitar, the opening eponymous title track is tailor made for fans of the six string with a circular guitar motif rotating, a Catherine Wheel, inside which solos swirl in every direction. The guitar is inventive but doesn’t obscure or overshadow the song structure and the virtuosity on display sets a template for the rest of the album.

Axe Victim was often compared with Ziggy Stardust which irked the band no end but those allusions are true to an extent. It’s mainly evident in the camp, ambisexual delivery of the lyrics and certain musical inflections like the clash of acoustic and electric guitars on ‘Love is Swift Arrows’. How of this duality was homage or zeitgeist is open to debate but I’m sure if Mick Ronson was given free reign on Ziggy it’d have sounded more like Axe Victim. However I’d say Axe Victim is greater in scope and uses a wider range of textures to weave its tapestry: ‘Third Floor Heaven’ rocks like ‘Baba O’Riley’, ‘Night Crawlers’ has the gritty realism of an Edward Hopper painting while ‘No Trains to Heaven’ finds Bill Nelson unleashing blistering solo after blistering solo. To call Axe Victim an ambitious debut would be an understatement yet its lofty ideas work and, befitting such a grandiose record, ‘Darkness (L’Immoraliste)’ is an orchestral closer.

Added onto the original album are four bonus tracks. Included is the first Be-Bop Deluxe single, privately pressed and ultra rare it’s a raucous ‘Teenage Archangel’ (a glam rocker/amped up proto-punk hybrid) coupled with a more dreamy, ethereal version of ‘Jets at Dawn’. Also included are first mixes of both ‘No Trains to Heaven’ and ‘Axe Victim’ which, stripped bear, offer a fascinating insight into the mechanics of Be-Bop Deluxe and how they built Axe Victim, from the ground up.

The second disc is a new stereo mix of Axe Victim and to say it’s a revelation would be a disservice. The first thing you’ll notice is the sound has been elongated so it reaches the very extremities of your speakers and this has the added benefit of creating space in the middle of the recording. While the original album had all the instruments bunched together this new mix separates the musicians so you can hear (and visualise) them performing, four different characters, detached but unified, in the studio. Listening to the original and new mix back to back you’ll immediately notice the difference. ‘Jet Silver & the Dolls of Venus’ is a good case in point, not only is it louder and more vibrant but Bill Nelson’s guitar positively shimmers while the double tracked and echoed vocals, previously buried are now brought to the fore.

I have mixed feelings about albums being remastered. Usually they’re released at an ear-splitting volume and used as weapons of attrition in the loudness war (sit down Rick Rubin!) plus there’s something a bit Stalinist about tampering with history. However Axe Victim is an instance of the process working well with ‘Third Floor Heaven’s guitars becoming more punchy with Jenny Haan’s vocals more exposed and you can now hear how hard the keys are being thumped. I’m sure even purists will approve of this cleaner mix as the whole album reveals nuances previously buried and (however blasphemous this may sound) highlights the hazy nature of the original mix.

That doyen of good taste John Peel had been championing Bill Nelson since his solo days and was responsible for getting Be-Bop Deluxe a session on the Top Gear programme. November ‘73 found the band in the Beeb’s hallowed halls and recording three tracks: ‘Axe Victim’ and two cuts that didn’t appear on any album and remain exclusive to this session: ‘Bluesy Tuesday’ and ‘Tomorrow the World’. Both are quality tracks and I assume they didn’t make the album due to time constraints. Like most BBC sessions they’re well recorded and sound like good quality demos.

Decca, the label that famously passed up on The Beatles, also let Be-Bop Deluxe slip through their fingers, but not before they recorded a session for the label. Again there’s that good demo vibe with a raw ‘Axe Attack’, a jaunty ‘I’ll Be your Vampire’, the whimsical and quintessentially English ‘Adventures in a Yorkshire Landscape’ and a raucous run through of ‘Bluesy Tuesday’. The next year found them back at the BBC, now with a record contract at Harvest you can hear the confidence in the group as they run through four tracks. ‘Third Floor Heaven’ and ‘Mill Street Junction’ are given tight-but-loose renderings whilst the semi acoustic ‘15th of July (Invisibles)’ and ‘Adventures in a Yorkshire Landscape’ ensures the disc ends on a rather whimsical tone.

The fourth disc in the set presents the Axe Victim in 5.1 Surround Stereo and, like the second disc, the sound is impeccable. A good pair of headphones is recommended and will allow you to explore the nuts and bolts of this classic record.

Released as a standard two-disc edition featuring the original and new mixes more suited to the newbie or casual fan and a lavish four-disc edition with various goodies for the Be-Bop Deluxe obsessive. But whichever you choose you’re in for a treat. 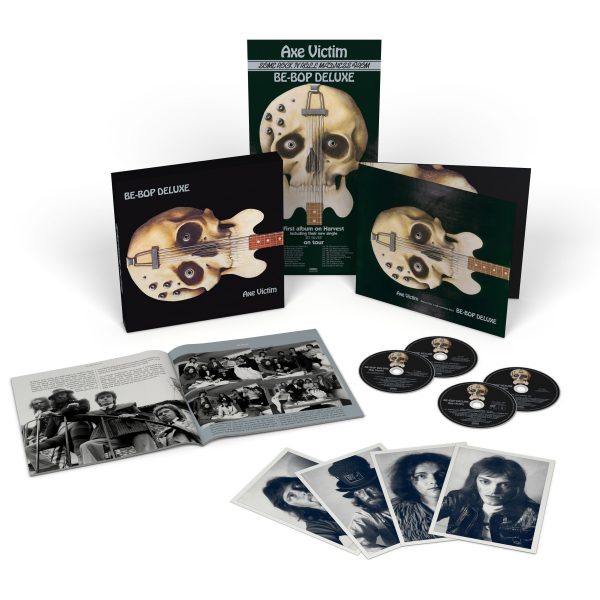