If ever a band was born at the wrong time, it was surely Hollywood’s Bangalore Choir. Releasing their bright and bouncy debut album in 1992 ensured that they were criminally overlooked in an age when being dour and maudlin was the height of fashion. However, time has been very kind to their uplifting brand of hair metal and All Or Nothing: The Complete Studio Albums collects their debut and two reunion albums (along with bonus tracks) to show why good music never goes out of style.

On Target had everything going for it: major label backing (Warner Bros), top producer (Max Norman), key co-writers (Bon Jovi, Aldo Nova) and, most importantly, a hard yet melodic sound. Rather strangely, it was the last of these that proved to be an Achilles heel in an era when grunge was riding high. Suddenly good time, raunchy rock n’ roll was viewed as prehistoric and subsequently On Target (now tagged a retrospective classic) sank without trace. As if to remind the record buying public of their folly On Target gets a timely reissue and three decades on it still sounds amazing. Opening with the heavenly ‘Angel In Black’ it gets the album off to a raucous start with squealing guitars, thunderous drums and stadium filling choruses. While much hair metal of the time was thin and reedy On Target is bold and brash and benefits from a bombastic production and on the evidence of this record Bangalore Choir really should have hit the big league.

Fronted by the irrepressible David Reece (who previously replaced Udo Dirkschneider in Accept) Bangalore Choir had an undeniable pedigree and that shines through every note of this album. My only real gripe with On Target is that it contains one too many ballads and it doesn’t take long for one to appear (the third track) but if you like power ballads in the vein of Europe’s ‘I Ain’t Superstitious’ then you’ll love ‘If The Good Die Young (We’ll Live Forever)’. But On Target works best when it rocks out, as with the quick one-two step of ‘Doin’ The Dance’ and the raucous ‘All Or Nothin’’ both of which push all the needles firmly in the red. Throughout this record Bangalore Choir play with an unshakable confidence, it’s as if they knew they were on the cusp of greatness and the melodic beauty of tracks such as ‘Slippin’ Away’ should have shot them to stardom.

Added as a bonus are live tracks recorded at Nottingham’s 2010 Firefest knees up and in the live environment these songs are given extra vitality and hit with added oomph.

After Bangalore Choir’s untimely demise, the band went on hiatus before they reunited with their core personnel (David Reece plus bassist Danny Greenberg and guitarist Curt Mitchell) for 2011’s Cadence album. 19 years since their debut the Choir barely missed a beat with their sophomore effort, and it sounded like they hadn’t been away. If anything, this record is a more balanced affair and contains more rockers that ballads (always a good move) with the band, now operating as a four piece, sounding far tighter. After a brief psychedelic intro Bangalore Choir get straight down to business with the explosive ‘Power Trippin’’. With a riff sent straight from the Devil’s bow this proves to be a darker album and Reece’s voice, aged like malt whiskey, is not dissimilar to (former Anthrax Warbler) John Bush while new drummer Hans in’t Zandt (now vocalist in Praying Mantis) ensures they pack a hefty punch.

I’m a big fan of the good time rock n’ roll found inside On Target but Candace has a more defined outlook. Without the co-writers and famed producer, Bangalore Choir have been left alone to create a record that gains from a singular vision and tracks such as ‘Tomorrow’ and ‘Never Say Goodbye’ have been honed into red hot laser beams. However, some music doesn’t bear over analysis and ‘Sweet Temptation’ is just a great, great, great song and it’s one that’ll follow you like a ghostly spectre long after the disc’s stopped spinning. ‘Surrender All Your Love’ makes for a strong closer and fans of classic ‘80s rock will find a spiritual home here. Candace doesn’t quite have the same chutzpah as its predecessor, but it certainly sparkles in its own way.

Three live tracks from Firefest are included as bonus cuts and, as with all the discs in this set, also contains a brief interview with David Reece discussing Candace but at just 60 seconds it barely gets under the album’s skin.

By the time Metaphor was released there were more changes in the Bangalore camp with the core group being joined by second guitarist Andy Susemihl and René Letters taking over the drum stool. Yet there was no discernible drop in quality and it continues the good work of Candace. ‘All The Damage Done’ is the high-octane opener and it’s a rally car in top gear that takes all the curves and corners at full throttle and the result is a white-knuckle ride which barely lets up over four frantic minutes. Amping up the sleaze factor the title track dances on lithe feet to a beat that’s dictated by René’s unorthodox time signatures and like a pole dancer, it displays all the right moves.

As with Candace this is a well-balanced album that largely eschews ballads in favour of hard hitting rockers but Metaphor is certainly not one dimensional and the jaunty ‘Never Trust Ole Joe Alone’ injects a nice change of pace. Heavy on the harmonica and replete with bright, acoustic guitar it wouldn’t sound out of place on an MTV Unplugged album. Metaphor further solidifies Bangalore Choir as one of Hollywood’s best exports and songs such as ‘Civilized Evil’ could trade punches with the best. ‘Always Be My Angel’ makes for a fine closer and remains their final track. It’s a fine swansong and brings things full circle and there’s no better way for a band to sign off.

If you’re yet to discover the delights of Bangalore Choir, then this lovely set contains all you need to know. If you’re already hip to the bands sweet sound having all three albums in one collection makes All Or Nothing an essential purchase. 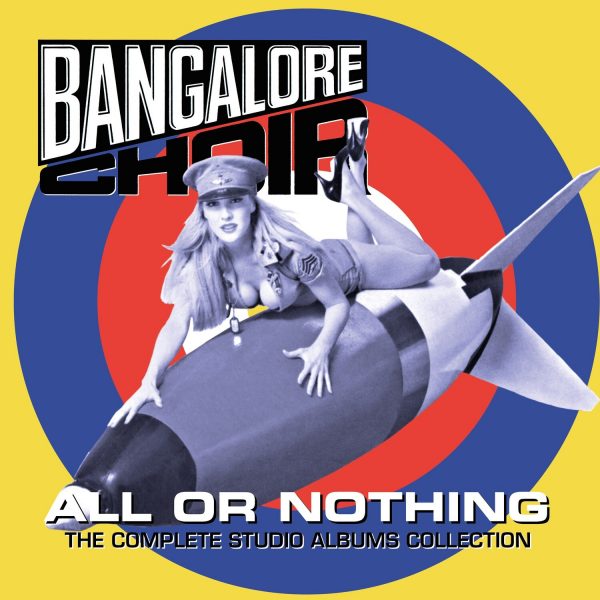