Over the last few years I have taken a keen interest in the Northern Ireland rock scene. What has struck me most is the abundance of talent that continues to seep from its ‘talent pool’. Band such as Stormzone, Trucker Diablo, Agenda, One Last Addiction, etc. have all enjoyed success to a greater or lesser extent, all founded on hard work, a loyal rock community and, more importantly, great music. The latest band to spark my attention is Baleful Creed a four piece from Belfast currently working the scene like those before them. So armed with this, their debut album do they deserve to join the aformentioned ‘elite’ and become the latest torch bearers for Northern Ireland? Well, as soon as the opening track ‘Baleful Creed’ bursts from the speakers full of powerhouse drumming and barbed guitar riffage, the answer is a resounding YES! Vocalist Fin displays an instant influence proudly, Danzig, whilst the rest of the band evoke The Almighty during their down-tuned ‘Powertrippin” era.

The abrasive assault continues with ‘Autumn Leaves’ sand paper dual guitars sit alongside an Alice In Chains type track. Fin once again proudly displaying his vocal influences, if you can imagine Glenn Danzig fronting Grunges finest you would not be a million miles of the mark. Some soaring guitars courtesy of John and Fin take this song above just being a pastiche of an era where everything was viewed in monochrome.

‘Illuminati’ sees the band attacking the false smiles of celebrity through suitably gritted teeth, once again everything is down-tuned a notch to perfectly enhance the bile being spat from their collective lips. Doom metal is never far from the bands agenda and ‘Crazy Man’ sees the band dip their toes in its murky waters. The guitar riff has Tony Iommi written all over it, and the vocals preaching from the altar of Evil Elvis.

So already it is clear where the bands influences lie and ‘Misanthrope’ continues the theme of angst and isolation, it’s title alone translates as ‘a general hatred or mistrust for mankind’. So it is no surprise the song is full of claustrophobic and tension filled moments, the lead vocals, this time delivered by drummer  Mark are suitably stark and are underpinned by an atmospheric Cantrell type riff. The album continues to chug along happily – or not so happily – if you will, with ‘Double FS’ and ‘Hex’. The former with a sound drier than a pharaohs sandal interspersed with soaring guitars evoking Sabbath at their best. The latter reminiscent of The Almighty once again circa 92/93 with a bowel-loosening guitar assault. Drummer Mark adding to the sonic assault with a wonderful resonance from his kit.

All this leads up to the albums finest moment ‘Her Promise’. A wonderful straight-ahead rocker that sees the band tipping a nod to The Cult in all their chest beating, strutting glory. A simple guitar lick attacks your senses and the melody rings in your ears long after the track has finished. If I were to compare it to one of their own brethren, let’s just say Trucker Diablo would be impressed such is its workman like muscle and infectious melody.

The whole package heads for home with with the doom-laiden ‘Thorazine’ which has the sound of Danzig and Trouble fighting it out to see who could steal Sabbaths crown, I closed my eyes for one moment and imagined Ozzy singing the lyrics. The track is punctuated with a wonderfully atmospheric mid-section that demonstrates a band with a keen eye on the ‘live’ performance, delivering a ‘show’, not just collection of songs. ‘Suffer The Silence’ ends as we began; low-slung, down-tuned and full of menace..with a subtle eye for melody.

It is fair to say Baleful Creed can add their name to proudly to the burgeoning scene that has so clearly inspired them. It is an album that wears it’s influences proudly – yes Fin does sound a lot like Glenn Danzig on more than one occasion, but this is no ‘pastiche’, this is the real deal delivered with honesty and integrity by four musicians in control of their own destiny. 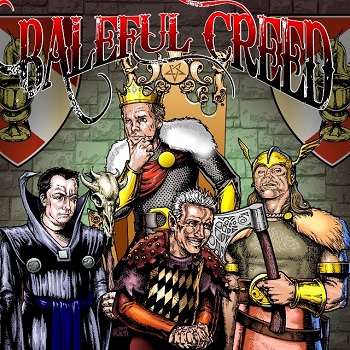